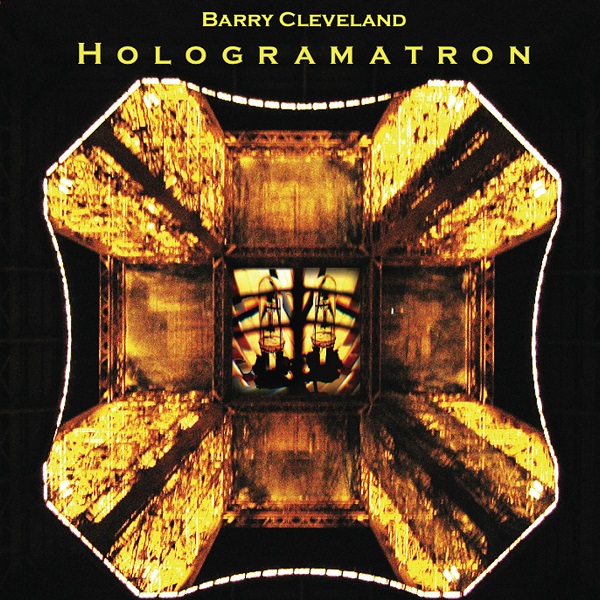 Barry Cleveland considers his new album a departure from past efforts. I’d agree, only insofar as many of the songs feature vocals. But for those who recall Cleveland’s lauded 2004 album, Volcano, things haven’t really changed all that much. Bassist extraordinaire Michael Manring returns for Hologramatron, with the remaining core of supporting musicians also including Robert Powell (pedal and lap steel) and Celso Alberti (drums and percussion). But as with past albums, there are two compelling reasons to add this one to your collection. First, Cleveland’s work on 6- and 12-string guitar, guitarviol, Moog guitar, and assorted other toys. I’m sure he’d acknowledge a debt to Robert Fripp and the Guitar Craft school, though this is merely a starting point with nods to David Gilmour and Steve Tibbetts also visible in Cleveland’s facile and evocative fretwork. The other why-to-buy is the songs, though I warn readers that Cleveland’s Bay Area Liberal cred is proclaimed loud and clear on tracks “Lake of Fire” and “Warning,” with Amy X Neuberg and Michael Masley delivering scathing indictments against corporate fat cats, religious conservatives, and others. But the remaining songs are less controversial, some exploring textural soundscapes (“Stars of Sayulita,” “Abandoned Mines”), some having fun with 60s pop (“What Have They Done to the Rain,” “Telstar”) and some echoing John Paul Jones’ industrial rock (“Suicide Train”). I commend Cleveland for having the guts to tackle sensitive political topics, as well as his ongoing instrument explorations. That this album also sounds great is gravy.