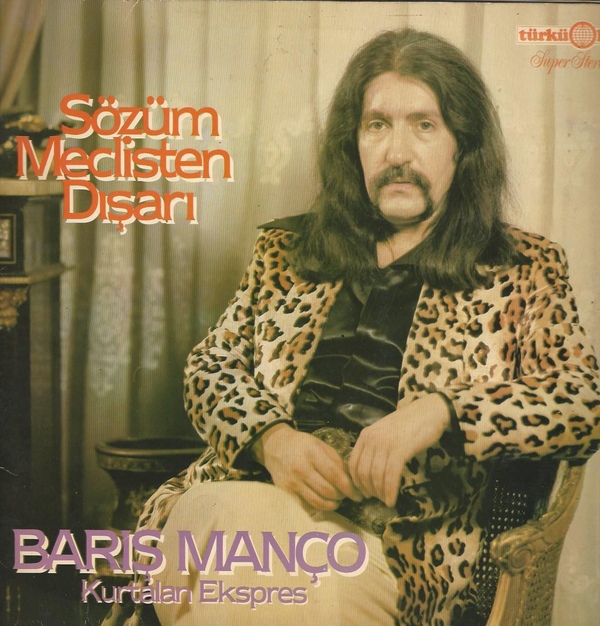 Back in the late 70s/early 80s was the heyday of big hair and flashy clothes for musicians. By today’s standards they now look pretty silly and sometimes downright creepy. Case in point is the cover of the reissue of Barış Manço’s Sözüm Meclisten Dışarı. The leopard skin jacket just adds to the creepiness. Remembering the adage that you cannot tell a book by its cover, I was not at all sure what I was in store for with this Turkish reissue. Sözüm Meclisten Dışarı was released in 1981 and it is a collection of nine funk / progressive / experimental songs, replete with strong rhythms and basslines, and Turkish themes. “Alla Beni Pulla Beni” opens the disc with funky bass and cheesy piano riffs, joined by brass keyboard sounds and Turkish lyrics that are traded back and forth between Barış and Deniz Tüney. This song is followed by “Arkadaşım Eşek,” an upbeat dance song that sounds pretty straightforward until Alvin and the Chipmunks make a surprise appearance on the chorus! Next is the title track with a funky bass supporting humming, wordless singing, and spoken narration accompanying liquid poured into a glass and someone chain smoking cigarettes. I’m not at all sure what to make of this song. Then we have Barış Manço’s interpretation of Rimsky-Korsakov’s iconic “Scheherazade.” For the first four minutes it sounds like an orchestra playing that familiar piece, then surprisingly it morphs into a rock n roll song with English lyrics. Pretty out there, yet an excellent track. Next in line is the cool and funky progressive “Gülpembe,” that may be the most approachable song for Western ears. Not one to remain fixed in one style, we are next presented with the superb boogie-funk song “Adem Oğlu Kızgın Fırın Havva Kızı Mercimek” that conjures up comparisons to George Clinton and Funkadelic. Then Barış takes the listener to the Bazaar with “Ali Yazar Veli Bozar” and its catchy melody and lyrics. All of the music leads us to the cosmic extravaganza “2025 (Üçüncü ve Son Yolculuk)” with analog synths, sequencers, vocoded voices, a Tangerine Dream pulsating sequence, funky riffs, and a drum solo to close out the song. The disc closes with “Dönence,” another Turkish / progressive rock fusion song, this time with regular singing, narration, and whispered vocals. As I am unfamiliar with Turkish rock, I do not know where Sözüm Meclisten Dışarı stands with respect to other Turkish rock from the same era. But if this review intrigues you, try to snag a copy for yourself, it is a fun listen.