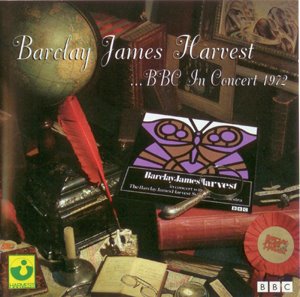 Part of archivist Mark Powell’s job has been digging through the vaults at the BBC to locate the master recording tapes for Barclay James Harvest. In the process of uncovering several live tapes he stumbled across a unique and rare radio broadcast. This excellent set of nine pieces from winter 1972 was a huge find of the previously undocumented live work for the quartet’s brief and expensive performances with their own tailored multi-piece orchestra. Songs played include the band’s standards of the day such as “Mockingbird” and the new piece “Summer Soldier,” which was the strongest epic from Baby James Harvest. The latter piece is a quartet tour de force as John Lees’ lead guitar pairs up with keyboardist Wooly Wolstenholme’s organ and Mellotron blasts. The keyboardist’s penned track “Moonwater” is also given the full orchestral delivery as many of his pieces seem to work well in the extended format. His grasp of the possibility of merging rock and orchestra arrangements succeeds when compared to either Jon Lord’s brief attempts with Deep Purple or the Moody Blues Days of Future Passed. Both “Galadriel” and “The Poet” come off well with strings as the delicacy of each song is allowed to come to the forefront on the live stage. “Dark Now My Sky” from the band’s first album carries an ominous stamp beginning with some over the top narration and proceeding into an intense ensemble performance. In summary these recordings provide ample support for BJH’s strong claims as founders of English symphonic rock.