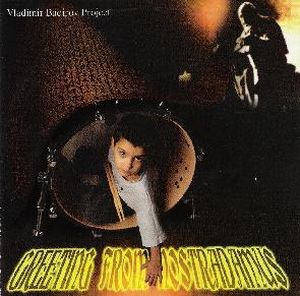 Vladimir Badirov is a drummer/percussionist hailing from Uzbekistan. Greeting from Nostradamus comprises eleven tracks of ethnic jazz fusion with Badirov’s drums and keyboard programming assisted by several other musicians on standard rock instrumentation but also horns, strings (including the sato), woodwinds (including clarinet and nay), doudouk, oud, and so on. The tracks “Nomad in Time” and “Lay Back, Nasretdin!” also benefit from a vocalist Ravshan Namazov, who comes in somewhere between Peter Gabriel’s “Across the River” and American scat singing to interesting effect. Badirov generally lays down a highly percussive ethnic groove and allows the other musicians to play over this. The mood of a track can very a great deal depending on who else is playing, and what they are playing. Some material is more typical guitar-fusion, closer to a Western sound. The release is at its most interesting when it’s at its most exotic, which is quite often. Three bonus tracks featuring alternate takes help round out the release.