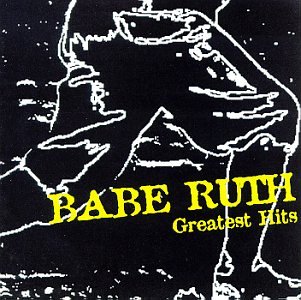 First, a bit of a history lesson. British band Babe Ruth debuted in 1972, sporting an incendiary hard rock sound ignited by the forceful voice of Janita "Jennie" Haan and jamming guitar/organ work of multi-instrumentalist Alan Shacklock. Though primarily a hard rock group, their tireless experimentation with wildly diverse styles was assuredly in step with the progressive rock of the era. Their incredible debut, First Base, encompassed more styles than may be able to be absorbed at first listen. Here they display a penchant for radically deconstructed cover versions, which may make them comparable to a hipper, heavier Manfred Mann's Earth Band; using as sources Zappa and Morricone as opposed to Springsteen and Holst. Their second and third albums (Amar Caballero and Babe Ruth) come off as recklessly irregular yet occasionally dazzling. After the self-titled album, Shacklock left, replaced by live second guitarist Bernie Marsden (whose best-known gig was with... er... Whitesnake). The magic was gone for the subsequent album, Stealin' Home, except for the two Haan-penned and Shacklock-arranged songs: "2000 Sunsets" and "Tomorrow (Joining of the Day)." Haan left after that, yet the band, which now included no original members, made one further album, Kid's Stuff, which many believe should never have been made. This compilation, while it avoids their absolute worst, sadly also glosses over much of their best work. The selections from First Base are good. "The Mexican," made famous for its use of Ennio Morricone's theme song from Sergio Leone's "spaghetti-western" For a Few Dollars More as its musical base. As such it's a classic. Their organ-driven, heavy rock interpretation of Jesse Winchester's (not Led Zeppelin's) "Black Dog" is excellent as well, but sadly missing is their driving workout on Frank Zappa's "King Kong." Also missing are any originals — Shacklock's "Joker" comes to mind. The danceable orchestrated rock-pop of "Lady" is hardly representative of Amar Caballero. I would have preferred the nine-minute title suite, which includes a lovely rendition of the traditional Spanish guitar melody "El Testamen de N'Amelia." But it is the representation of their third album which suffers most: its twin classics "Dancer" (heavy jam rock) and the dramatic "The Duchess of Orleans" are nowhere to be heard. "Turquoise" with its gentle flamenco stylings is nice, but hardly up to the standard of their best work. The straight hard rock of "Jack o'Lantern" may have been popular, but it's far from their best. And while it's cool to hear Curtis Mayfield's "We People Darker Than Blue" set to Mellotron and Moog, for a white woman to sing a song about the black male experience comes off as a bit irrelevant. Smart decision, including only one song from Stealin' Home: "Tomorrow (Joining of the Day)". Smarter decision, forgetting Kid's Stuff ever existed. In short, if you want to learn about the band, don't start with this album. Instead, start with First Base, which may or may not still be available on CD.