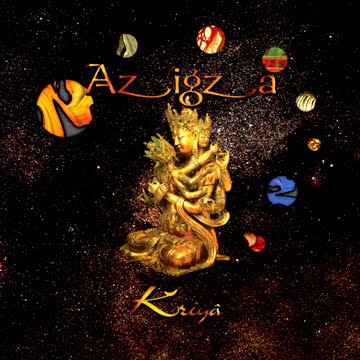 Combining influences from around the world can be a dangerous enterprise for musicians. There will always be some who call foul at the “appropriation” of sounds from other cultures, preferring their World Music “pure” and true to its roots. Certainly for every success like Peter Gabriel or Afro Celt Sound System, there’s a failure like Rusted Root, who for all their sincerity (for all I know) come across as dilettante dabblers. Of course this idea of fusing different cultures goes back to Santana and the Beatles and other pioneers of the late 60s, but with a few exceptions, it’s never caught on in America, at least with a wide audience. The first time I saw Azigza in 1999, I figured them for another interesting failure, though their connection with the Gong crowd (due to the appearance of Gilli Smith) gave them a little something to set them apart. But from those shaky beginnings has grown something truly wonderful. Their meshing of Mahavishnu, King Crimson, and space rock with the musics of Eastern Europe, India, Africa, and the Middle East has coalesced into something uniquely theirs, and Kriya is pretty much brilliant from start to finish. I’m reminded of the potential shown by Sky Cries Mary, who came from similar places, but never quite gelled. Azigza’s success is due in large part to the technical prowess of the musicians, which is tempered by the good taste to know when atmosphere (courtesy of found sounds and voices) is more important than energy.