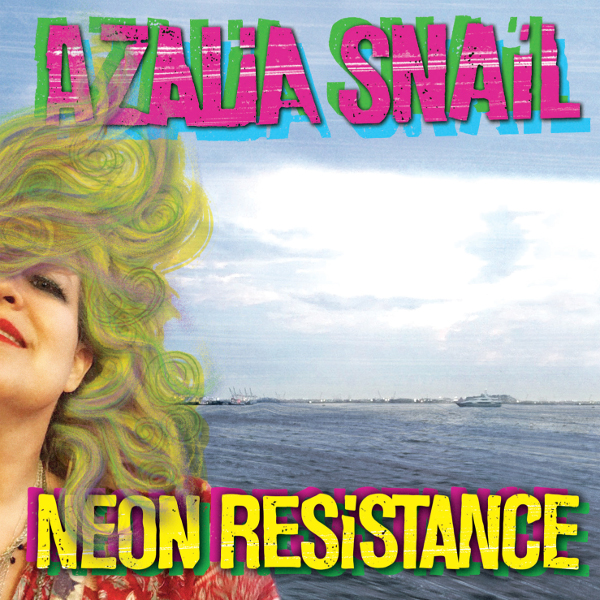 Over the last couple of decades, Azalia Snail has earned the title “Queen of Lo-Fi,” but with Neon Resistance, that designation seems less appropriate. The “Lo-Fi” part, at least. Maybe it’s just the increasing availability of good quality recording equipment at affordable prices, but this album exhibits no difference in sonic quality than any number of other independent productions from artists like Feist, Grimes, an so on. The instrumentation consists of a mixture of real and programmed parts put together quite nicely. Keyboards, guitars, programmed drums, and (possibly) real percussion are used to back multiple vocal parts. Overall, the impression is rather like an imagined private recording by Deborah Harry indulging in a spurt of creativity warped by surreal humor, perhaps after listening to some Residents albums. On several of the songs, the Blondie comparison is impossible to ignore, with a great vocal similarity bolstered by a general similarity in style. It’s kind of like New Wave rock gone electronic, with artsy, quirky touches for spice. The other defining factor is a weird sense of humor, with songs like “The Moral Chemist” (“I am the moral chemist / I fly into the light of the sunkiss [sun kissed?] / Rain police to the rescue / I peek beyond the parallax view”). Of the 12 songs, only two top the four minute mark — she establishes her ideas, kicks them around a bit, and moves on before they wear out. All in all, it’s a fun set of left-field art-pop that should induce smiles — though there are serious themes behind some of the fluffy sounds, she doesn't beat listeners over the head with them.