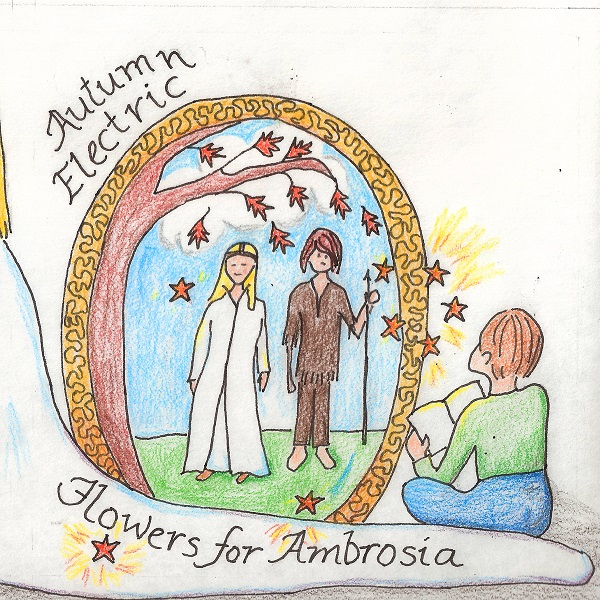 I was quite pleased when I discovered Autumn Electric's previous CD, but I knew their live performances were already including some excellent new material. Flowers for Ambrosia more than exceeds my expectations. It may be divided into ten tracks, but if you listen without watching the track number display, you'd probably think there were a lot less — the first several tracks run together into what sounds like a continuous suite. The lyrics don't necessarily tie together, but the smooth transitions give the impression of new chapters in a continuing story. Not that the tracks sound alike — far from it — but there's an unmistakable flow to the mood. If you're anything like me, by the time you hear the first few bars of "Riding the Rogo," you will be totally hooked. It's got a quick tempo and a catchy melody, and changes meter more times than you can count, all while sounding so natural you'd think all music was like this. Moving along, we find a little oddity called "The Ballad of Magnum P.I." — a nice homage to the number one private detective located in Hawaii in the 80s. But if you've been paying attention to the readout on your CD player, you noticed that track 10 clocks in over 22 minutes in length. As prog epics go, it's of the "Supper's Ready" variety, being a suite of sections that flow from one to the next, some vocal, some instrumental, and occasionally revisit themes from earlier sections. Just to throw out some highlights... Max Steiner is responsible for some really great guitar work, from screaming wah-wah solos to freaky sound effects; Johnny Unicorn adds some nice touches on sax; and Naomi Adele Smith, in addition to providing a female vocal foil to Michael Trew's leads, plays some really good keyboard parts. But it's really the combination of all these elements and more that makes this one of my favorite releases of the year so far (and unlikely to be surpassed in the coming months).