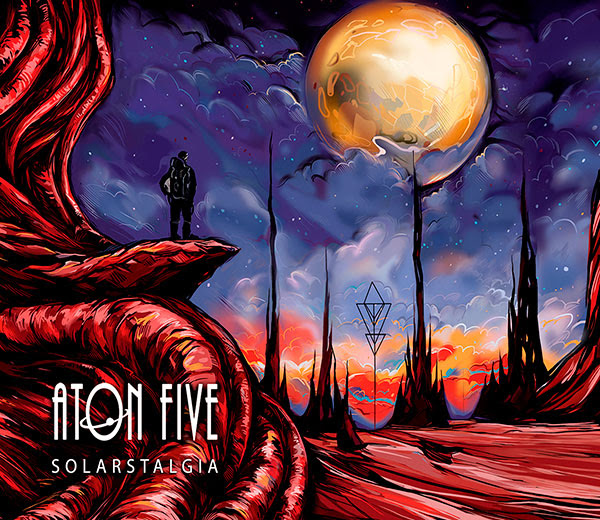 If you’ve been reading reviews on our site for a while, you might have come to the conclusion that Russian bands all play space rock. OK, maybe not all of them, but a significant portion. Aton Five will not dissuade you of that impression, but you shouldn’t let that steer you away from them unless you really hate anything with even hints of space rock — which doesn’t really make sense, since it’s a description so broad as to be almost meaningless. The thing about Aton Five is that their brand of instrumental rock has more going for it than just rehashes and recombinations of things that Pink Floyd, Hawkwind, and Ozric Tentacles have done. While there are bits reminiscent of all of those, there’s more going on here than just that. They bring in some proggy tendencies more akin to things that used to be common in the 70s before extended instrumental sections went out of fashion. Think of classic Uriah Heep, where the middle section of a song might involve organ and guitar trading back and forth with licks. Aton Five is kind of like a band that just does those middle sections, making them into pieces of their own. Several tracks feature what sound like vintage voice recordings from movies or TV shows, but I can’t identify them. I really enjoy Daniel Bosak’s keyboard work, which takes on classic organ sounds as well as synthesizers. Maybe the sounds are emulated by modern digital instruments, but he uses a lot of sounds that resemble overdriven Hammond or Minimoog, and it works well. Alexander Seleznev’s guitar work is rarely of the flashy variety, but always suits the tunes well, and his riffing locks in the grooves perfectly. The thing that sets Aton Five apart from run-of-the-mill space rock bands is their willingness to change up the music — rather than repeating a riff for many minutes, they’ll have a progression that works through changes and then move on to different sections. So even if you’re turned off by the tendency of space rock bands to ride a riff for long stretches, you might appreciate Solarstalgia, but nothing is so jarring that it leans towards fusion or RIO. I like the direction they’ve taken, and look forward to more from this band.

Over the last twelve months we have reviewed many different releases from Russia, some excellent, some good, and some not so good. Aton Five’s new release, Solarstalgia, falls into the excellent category. I really like this album. The cover art may lead you to think that Aton Five is another space rock band. However, they are more of a psych-prog instrumental band with nostalgia for 70s and 80s prog. The band is Daniil Bosak (synths, Rhodes piano, accordion), Alexander “Ritchie” Selexnev (guitars and percussion), Dmitry Smirnov (drums), and Mikhail Zenfov (bass and percussion), plus guest Anton Ablov (organ) on “Milky Way Incident.” I have to say that Bosak plays some incredible pseudo-Hammond organ across the disc, even evoking Billy Preston on “Journey.” And Ritchie’s guitar work superbly captures the 70s / 80s vibe. Aton Five also peppers the tracks with unaccented English sci-fi sound bites. They cite Georgiy Stefanov, Ivan Stefanov, and Yana Shumskaya as voices, so these bites may not be from any specific media source. The tracks that stand out for me are the martial “The Dreadnought,” “Journey,” “A Chain of Events,” “Milky Way Incident,” and the album closer “The Endless Desert.” Highly recommended to fans of 70s / 80s prog jams.

Slivovitz - Hubris – Here’s one of those hard to classify albums that covers a lot of ground but is generally centered in a sort of ethnic area of the jazzosphere, with some nods to Zappa as well as middle-eastern...  (2010) » Read more

Andreas Akwara - Synthetic Horizon – When I first listened to this new effort from the German composer Akwara I immediately had to turn the treble far down, because the sharpness of the sound was just ear-splitting. Synthetic Horizon is...  (2006) » Read more

Art Zoyd - Faust – It's been too long since I've heard anything by Art Zoyd. They have continued down their unique path begun on L'Enfer, taking them in recent years to the macabre soundtracks of German...  (1997) » Read more

Presence - Black Opera – For their second album, this Italian group has expanded on its dramatic, heavy-metal-meets-neoprog sound. A quartet of guitars, keys, vocals, and drums, their music flirts with a quasi-operatic...  (1997) » Read more