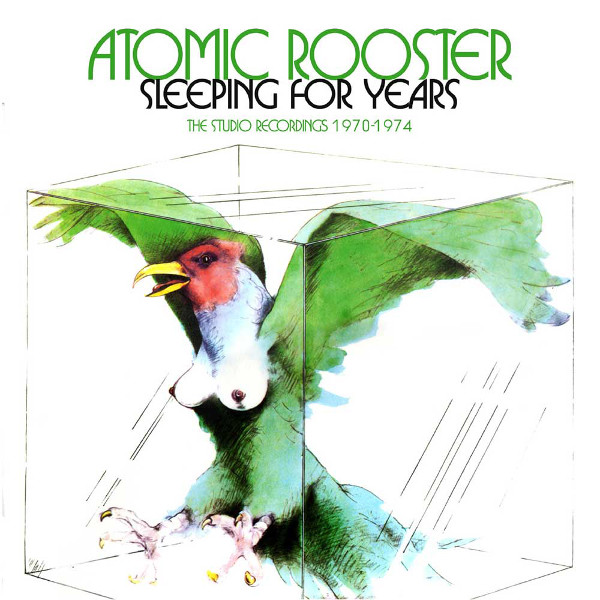 Atomic Rooster was one of the most spirited and pioneering progressive rock units of the early 70s in Britain, and this four-disc clamshell box set certainly goes a long way to offer the evidence of that. The band is also pretty much synonymous with the late Vincent Crane, keyboard player and songwriter best known for his bold and aggressive Hammond organ style, brought with him from his previous band, The Crazy World of Arthur Brown, that which produced a worldwide hit with “Fire.” Atomic Rooster at its inception was co-founded by Crane and one of the drummers featured in Crazy World, Carl Palmer, after the end of a US tour in 1969. Bassist Nick Graham (doubling on flute and taking on the lead singer role) was recruited to make it a trio and before long they were in the studio recording their eponymus debut album, released in early 1970, which comprises disc one of this set, along with three alternate versions that were recorded for an American release that never happened, featuring incoming guitarist and singer John Cann, two demos, and the single version of “Tomorrow Night” which would be featured on their second album in 1971. That’s right, within weeks of the first album’s release Palmer got the call from Keith Emerson and the rest is history. Crane decided the band needed a guitarist, but wanted to keep it a trio, so Graham was out and guitarist / singer John Cann (ex-Andromeda) was in.

Such tumultuous membership turnover was the constant theme of Atomic Rooster’s existence. So the second album Death Walks behind You, released in late 1970, perhaps the band’s strongest release from this period, features wholesale turnover from their first, with Cann and incoming drummer Paul Hammond joining Crane. Disc two of this set features all of the second album, the single A-side “Devil’s Answer” (from June1971), a single B-side “Play the Game,” and the first half of the band’s third album, In Hearing Of… from August 1971, another masterful creation with all the power of the two previous records. Surprisingly, the same members from the second album survived to the third, along with new lead singer Pete French, but it wouldn’t be long before French left to join Cactus, to be replaced by Chris Farlowe, and Hammond would be replaced by drummer Ric Parnell, and Cann replaced by guitarist Steve Bolton. Disc three of this set contains the remaining songs from the third album plus all of the band’s fourth album, Made in England, from 1972, featuring the aforementioned lineup changes, which amounted to another wholesale band change-out around Crane. Farlowe, who had sung with Colosseum previously, is a gifted singer with a soulful voice, so Crane took the band more in that direction, making Made in England very different from its three predecessors, but nonetheless exceptional. Farlowe and Parnell survived to the fifth album Nice ‘n’ Greasy, released in late 1973, with guitarist John Goodsall replacing the departing Bolton, listed in the credits as Johnny Mandala, and is featured on disc four of this set, along with a couple other tracks included only on the USA and German releases. With Farlowe still behind the mic, the band continued in its more soulful direction, a bit more harder edged than its immediate predecessor. Except for a single “Tell Your Story (Sing Your Song)” / “O.D.” from March 1974 (included here), by which time Parnell, Farlowe, and Goodsall had all left the band, this would be the last new music from Atomic Rooster until they reformed again in 1980, and a good point to close this set.

It’s good to have all these releases together in one set, with all the extra tracks, although the third album being split across two discs is unfortunate. And the 32 page booklet with photos and details of all the band’s workings during this period is invaluable. Esoteric does it again.