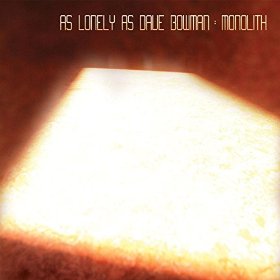 Dave Bowman, as some of us may remember, was the protagonist in the 1968 science fiction feature film 2001: A Space Odyssey (and numerous lesser known follow on books and films). As Lonely as Dave Bowman is the solo ambient drone outlet for Black Tape for a Blue Girl bandleader Sam Rosenthal, also the founder of the Projekt label. Monolith is the second release (the first was Pod from 2007), which across its four tracks truly captures the vastness and solitude of space, moving slowly through an expansive frozen electronic wasteland that document Bowman’s travels to the Monolith near Jupiter. There are no words needed beyond the track titles to document this journey, only the changes in texture that proceed like a slow glacial drift, peppered with seemingly random sonic disturbances that suggest external events outside of the insular pod. One hardly notices the track changes, instead seeming like a void in the spatial drift, then suddenly something new appears, slowly evolving as it goes, again drawing the listener further into the concept. Rosenthal is the fundamental creator of this soundworld, a masterful application of electronics and sound processing, with some input from Steve Roach, Martin Bowes, mastering by Howard Givens (of Spotted Peccary) as well as support from others. Monolth truly captures the emptiness of the void, but also provides the listener some warmth and peace at various times along this 73 minute epic. Monolith was started as a crowd-funded project and as such only slightly over 300 physical copies exist, presented in a cardboard DVD sized package (much like Pod was), however it will be available as a download to all for a limited time.