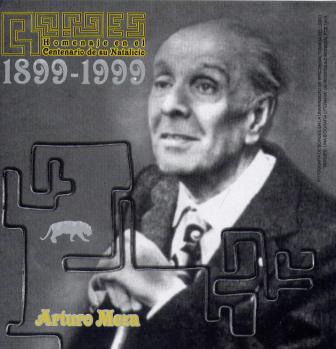 It’s been so long since we have heard anything from this Mexican prog man that I was beginning to wonder what happened to him. Outside of various appearances with the likes of Nirgal Vallis and Jose Luis Fernandez Ledesma, I don’t think Meza has released any solo material in ten years. Well now he is back, and true to form, he avoids the conventional or the expected, with a conceptual tribute work commemorating the centennial of famous Argentinian author, Jorge Luis Borges. The idea seems to promise a lot, but unfortunately it is only about half of an album, clocking in as it does at around 25 minutes. Five middle-length tracks feature the recorded voice of Borges himself (on all but one), reciting from his works of poetry. But the recitation is kept at a low volume, allowing the emotional, operatic voice of Marisa de Lille to shine through. Meza colors the canvas with delicate backdrops of synthesizer and guitar, in small doses. Technologically his arsenal is less than up-to-date, which is probably for the better as it keeps his sounds more rooted in a timeless environment – though he could benefit plenty by a real percussionist in the one or two sections that feature electronic drumming. His creative realm is hard to pin down for sure; almost hanging in a new age setting, but vastly more dramatic and emotive, with a nod towards classical and baroque music to evoke that timeless quality which is a staple of his music. Arturo’s music rarely sacrifices that signature Mexican/European blend, its fragility perhaps threatened in a way that excites wonder as to when, if ever, he will bring forth a bold statement of intent. In the meantime I will never exhaust my fascination with his work.