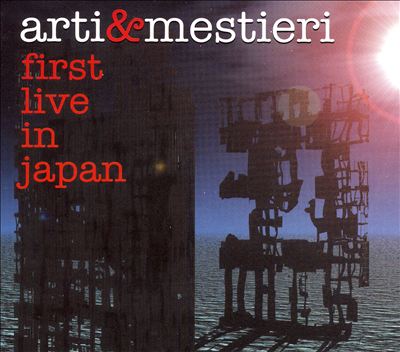 The modern incarnation of Arti e Mestieri has not seen much documentation on CD, so it is nice to see this release covering a recent concert in Japan. The two main components of the group are still present: Beppe Crovella’s arsenal of keyboards, and of course Furio Chirico’s awe-inspiring drumming. Bassist Roberto Cassetta, who those in attendance at ProgDay 2003 would remember, is still present on bass and backing vocals. Alfredo Ponissi, who first appeared on 2005’s Estrazioni, is here on woodwinds. The other three members are all new. The set-list is broken down to cover all aspects of the band’s career, with two lengthy suites from Tilt and Giro di Valzer per Domani respectively. Of the six remaining tracks, most come from Murales but there is also a lengthy solo bit by Crovella called “Kawasaki” which I believe is new. The performances mirror the progression many of us go through in life; they reflect the increased sophistication, experience, and professionalism of the group, suffering next to the originals only in fire and abandon. That is not to say the performances lack energy, because they do not, simply that the original studio albums from the 70s are crazier, and this concert is more polished. If you have been waiting for a live release from Arti e Mestieri, this one delivers the goods.