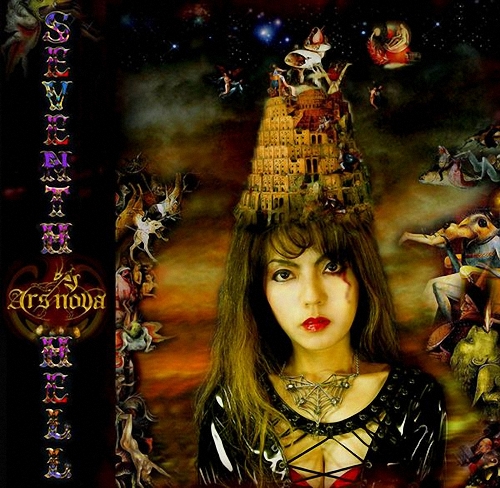 The opener “Seventh Hell” presents twelve minutes of intensely convoluted frantic bombast, busy and chaotic at every melodic intersection, though sensibly arranged; in short – exactly what one might expect from Ars Nova, very much in the vein of Italian horror movie soundtrack masters Goblin, though ratcheted up in complexity and presented with a more current sound. For those who haven’t kept up with Ars Nova over their last few releases, they are a quartet now, the band’s keyboard-and-drums heavy approach rounded out with bass and lead guitar, as well as several guests who join in on additional guitars, bass, and vocals on a few cuts. Still in command is keyboardist and chief composer Keiko Kumagai, the remainder of the band being all new faces since I last saw them in Baja around six years ago. Those vocals make their first appearance on the second track “La Venus Endormie,” which also introduces some Spanish folk flavor into the mix. Make no mistake, though, Ars Nova is still primarily an instrumental outfit, although the presence of multiple guitarists has taken some of the focus off the keyboards, and the sound is much more varied and interesting as a result. Also of note is the sidelong closing track, again mixing in some vocals, European folk styles, and tasty classical motifs, lifting the sound out that strictly Goblinesque groove. All taken this is among the best releases in Ars Nova’s oeuvre.