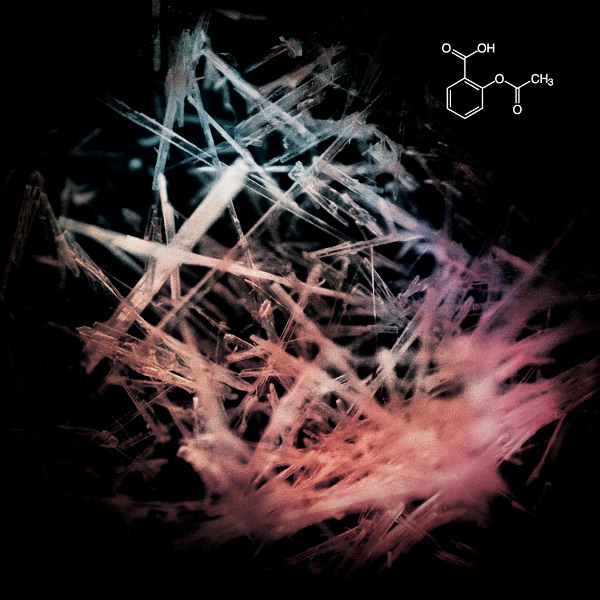 The first thing you notice about this album is the delicate crystalline structure of the cover art and then the molecular diagram of aspirin or acetylsalicylic acid. Then there are the track titles “37°,” “38°,” “39°,” “40°,” “41°,” “Acetyl,” “Salicyl,” and “Säure.” Tracks “37°” to “41°” are parts of one long piece that slowly heats up. I can only guess at the meaning. I did find the 37° C is the temperature at which you can dissolve aspirin in water. And 41° C (105.8° F) is the maximum temperature of the human body that can be treated with aspirin. And the final three track titles together are the chemical name of aspirin. Now, I am only guessing, but it appears that the “Acetyl” is by Arbeit, “Salycil” by Schickert, and “Säure” by Schneider. ASS is the collaboration of these three generations of renowned Berlin guitarists: Günter Schickert (born in 1949), Jochen Arbeit (born in 1961), and Dirk Dresselhaus AKA Schneider TM (born in 1970). This musical project blends Schickert’s Krautrock stylings with Arbeit’s punk rock and Dada (Einstürzende Neubaten) and Dresselhaus’ indie / house rock viewpoints to create something new. The combined 22 minutes of the temperature tracks slowly build from abstract sounds, drones, noise, and electronics to include reverbed and reversed sounds, noise bursts, metallic bells, and ultimately sequenced guitar loops to end with a Krautrock flourish. “Acetyl” has a hypnotic vibraphone loop and an improvised trumpet that intertwines with the rhythm and eventually turns melodic. “Salycil” has a strong beat, electronics, and a cool Krautrock vibe. And the closer “Säure,” with its abstract drones, reverberating chords, and high frequency electronics, can be quite harsh on the ears towards the end. Quite an interesting release perfect for the adventuresome listener.