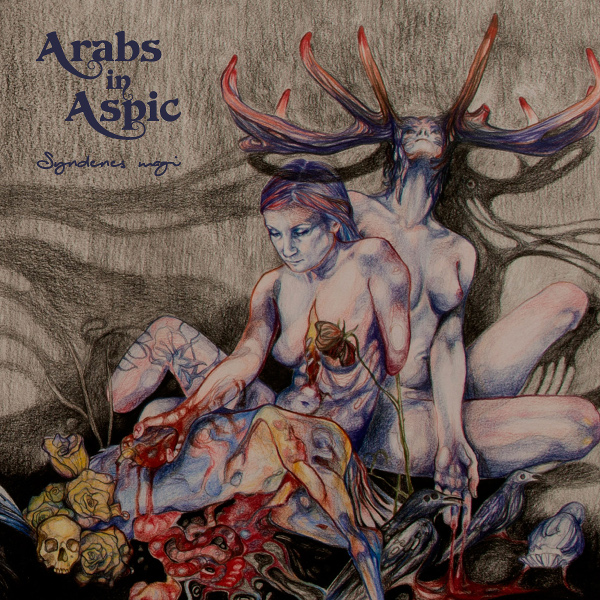 For their newest album, Arabs in Aspic have diverged somewhat from the 70s hard-rock influences of their previous work, giving us instead three tracks of epic progressive rock. Over the course of the album, you might be reminded of Pink Floyd, Anekdoten, Il Balletto di Bronzo, Qoph, Eloy, and others, but aside from the fondness for vintage keyboard sounds, there’s not really anything that’s specifically derivative. It’s an oversimplification to say that Syndenes Magi sounds like Wish You Were Here interpreted by Wobbler, but it is an apt comparison. Some of the chord structures fit right in with Pink Floyd’s mid-tempo space blues sound and are topped by blues-inflected guitar, but the keyboards, whether Hammond organ or Mellotron, are much more up-front and flashy than Richard Wright ever was, and the Norwegian lyrics are of course outside the Floydian realm. The use of percussion at times is similar to Jamie Muir’s work on Larks’ Tongues in Aspic, an impression heightened by having Mellotron strings backed by riffs with prominent tritones. “Mörket 2” features acoustic guitar through several phases of build and release, with enough changes each time through the cycle that it works admirably. And there are places over the course of the album where they drift off into really spaced-out territory, the most extreme of which is during the last eight minutes or so of “Mörket 3,” which closes out the album on a meditative and somewhat creepy mood after one of the fastest and heaviest sections of the whole set. Echoing effects, swooping noises, and indistinct stuttering sounds wander in and out of audibility, finally dissolving into eerie chords from the keyboards followed by simple strumming acoustic guitar and a folksy vocal melody with some lovely harmonies. Syndenes Magi is a fine effort, and quite an enjoyable listen from start to finish.