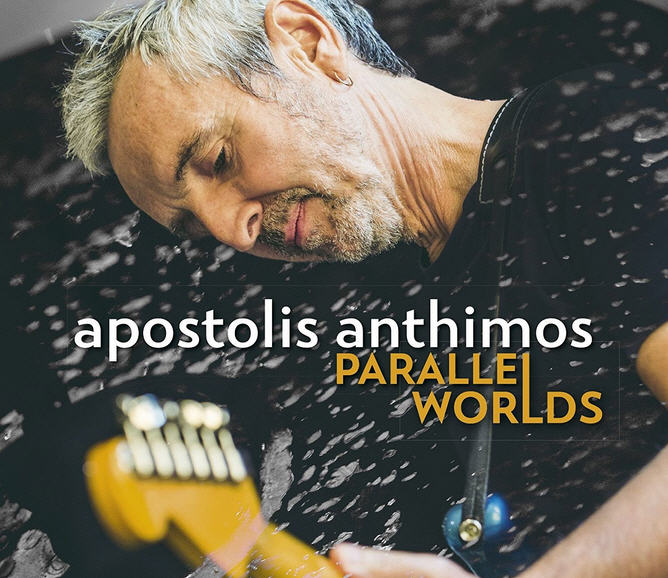 One of the founding members of Polish progressive legends SBB, as well as Czeslaw Niemen’s band going back a few years before that, this Polish-born guitarist of Greek parents is one of the most recognized names in the pantheon of Polish rock musicians. For all of that acclaim, however, he only has five solo albums to his credit overall, and Parallel Worlds is his first in the last ten years. Anthimos plays both guitar and drums across the album’s fourteen tracks, and though he is also a fine keyboard player, here he has chosen Piotr Matusik on keys and piano; Robert Szewczuga – another rising star in the Polish jazz-rock scene – plays bass throughout, and Olaf Wegier on tenor sax rounds out the basic quartet. While the opener “Story I” could easily pass for a lost outtake from Pat Metheny’s American Garage period, it’s a very well tempered piece and perhaps is indicative of one of Anthimos’ influences from the past (he did cover Metheny’s “Offramp” on his first album Days We Can’t Forget from ’94). After that opener, things get a lot more original with “Pinnochio’s Dream,” an eleven-minute reworking of an earlier piece, still staying within the jazz and jazz-rock idiom (as does nearly everything on the album) while everyone in the quartet gets their chance to shine in the spotlight. “Back to the North” is another reworked piece from Anthimos’ 2006 album of the same title, here taken in a more extended and freewheeling direction. A couple other reworked pieces from his 2008 Miniatures album, “Tata” and “Manhattan Circus” are here as well, but the rest of the album is new material. One beautiful piece, “Goris,” brings in guest vocalist Sylwia Klara Zasepa to sing the Polish lyrics over a slow and pensive, yet powerful progression, vaguely reminiscent of Pekka Pohjola’s Everyman period. “Bar Wah Wah” showcases the group’s funky side with a solid punch from Wegier alternating with more sensitive moments driven by Matusik’s piano, with Anthimos’ drums and Szewczuga’s bass tying it all together over its nine minute duration. Another outstanding piece, “In the Big City,” brings in singer Janusz Hryniewicz to handle the gritty scat vocals, and offers a showcase for an amazing solo from Szewczuga (and in fact the entire band wails throughout). On “McCoi” Anthimos shows us how it’s done by running his guitar through ring modulator (and other) effects on this mainly improvisational piece. “Mussaka in Evening” is short and succinct, yet a tasty jazz romp through mysterious places. All taken this is one brilliantly concieved set, played by an exceptional group of musicians, the new material is outstanding, and the re-workings are improvements on the originals.

Pekka Pohjola - Five Reissues – For anyone not yet familiar with the name of Pekka Pohjola, he is a Finnish composer, bandleader, and bassist among bassists primarily, but also fluent on piano, synthesizer, and trumpet as well. He's...  (1995) » Read more