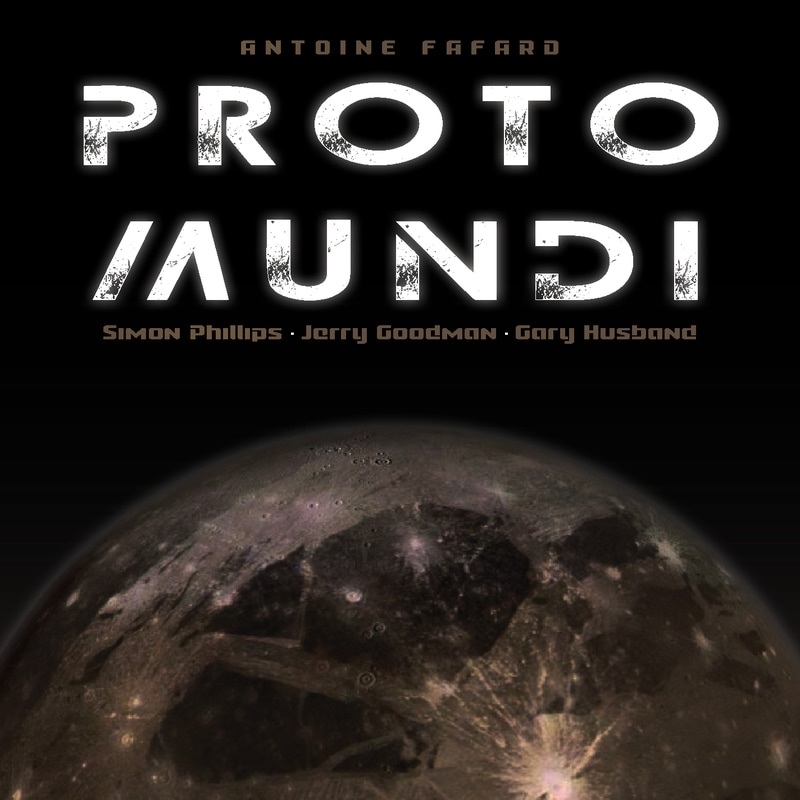 It’s only been about a year since Fafard’s last release, Spheres, but the growth and development during that short period has resulted in his finest release to date. His four earlier solo releases were packed with stock-parts fusion instrumentals in the four-to-six minute range, featuring a number of name collaborators like drummers Gary Husband, Chad Wackerman, and Dave Weckl, guitarists like Jerry de Villiers, Scott Henderson, and others, saxophonist Jean-Pierre Zanella, and violinist Jerry Goodman. Those are all outstanding releases, but on Proto Mundi Fafard has taken his craft to the next step, and a giant step it is. Most will probably have heard the bassist at one point or another with his previous band Spaced Out, which released a half dozen outstanding CDs and a two DVDs between 2000 and 2008. Although it is 100% instrumental, Proto Mundi (Fafard has a fondness for Latin album titles, apparently) is a futuristic concept album about the proposed colonization of Ganymede, one of Jupiter’s moons, and the journey of a young artist named Adam, as the first person to make the long journey. The three-part story is detailed in the accompanying 32 page booklet, corresponding to the three lengthy instrumental tracks on the album, “Mission Ganymede,” “The Journey,” (both in excess of 20 minutes) and “Empty World,” the ten minute conclusion. Joining Fafard on this journey are Gary Husband, this time on keyboards, drummer Simon Phillips, and violinist Jerry Goodman, none of whom should require any introduction to readers of Exposé. This time Fafard handles all guitars as well as his usual six-string bass. These long tracks are seamless suites of high energy instrumental fusion, with plenty of shifts in the overall dynamics to keep the proceedings interesting, as well as allowing each of these players plenty of time in the spotlight.

This is a 2-CD set, so one might ask, "What’s that second disc all about?" It has its own title, Doomsday Vault, and features fifteen tracks, including eleven remixes from his first three albums originally released on Unicorn Digital: Solus Operandi (2011), Occultus Tramitis (2013), and Ad Perpetuum (2014 — remember what I said about Latin titles), one more “Shuffle It!” that was completely re-recorded, and the remaining three tracks are previously unreleased compositions that were destined for a seventh Spaced Out album that was never completed, featuring Spaced Out drummer Martin Maheux, and freshly re-recorded parts by Fafard and Goodman. At a few seconds shy of 80 minutes, the 15 tracks on Doomsday Vault are a bit much to absorb in a single sitting, and while all are excellent, the main event here is disc one, which is by far the best thing Fafard has released.