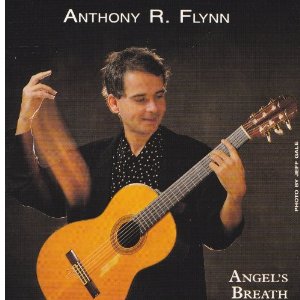 What first struck me as sort of a Spanish flavored acoustic guitar based fusion album in the mold of some of Al DiMeola's adventures or Strunz & Farah began to change midway through the album. It's true that the first eight or so tracks tend to overly highlight the Spanish guitar and underplay the rest of the instruments (keys, bass, drums, percussion), but then Flynn slowly begins to reveal another side of himself, full of electric energy and fire. Flynn hails from just south of the border in Guerro, Mexico - and throughout the album there is much of the local flavor in evidence. "Song No. 3" offers some of that true Mexican flavor, and also hints of the energy to come with some adventurous guitar leads. Several more songs focus primarily on the acoustic guitar - either solo with backing, or in duet; an uncredited trumpet paints a colorful melody on the album's title track. By the time we reach "Dos Raicines" (#10) the music has definitely taken off into a more rock oriented direction a-la Joaquin Lievano. "Blue Eyed Ballad" is pure electric with a screaming lead line, plenty of changes and a lot of emotion. The followup track "Hindoue Voodoo" employs sitar, tablas and synthesizer to effect a lengthy introduction, which bursts into ripping guitar fusion about two minutes in. The album closer is a cover of McLaughlin's "Hope," a wind-down track that bears no relation whatsoever to the musical style that began this album. An interesting journey to say the least.