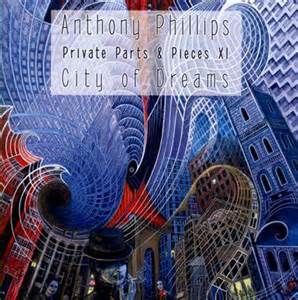 The former Genesis guitarist’s extensive discography is embellished with releases in two ongoing series – one is Missing Links, and the other is Private Parts & Pieces, of which City of Dreams is installment number eleven. Phillips plays all the instruments on the 31 tracks herein (no vocals on this one), mostly short, reflective, atmospheric vignettes built around synthesizer, piano and other keyboards, with some guitar as well (mostly heavily processed). All of these brief explorations work together nicely to take the listener on a journey through a series of brief soundscapes and portals leading to the next piece, where it all begins again. Moods and dreamy atmospheres are created, explored, and then cast away almost as soon as the melody, texture and chemistry has been defined, often within one minute or so; few cuts here even crack the three minute mark. There’s little here that one will take away after the last track plays, this is experiential music, a world unto itself that exists only while the disc is playing. That said, the overall feel of City of Dreams may recall Phillips' 1987 album (and seventh in this series) Slow Waves, Soft Stars. In all, this is another excellent addition to this versatile composer’s ongoing discography.