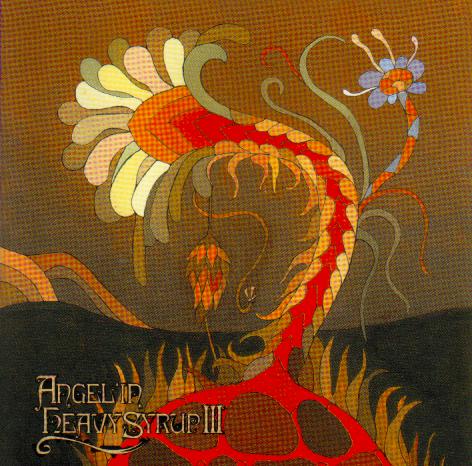 Angel’in Heavy Syrup is a four piece band from Japan. The group is composed of Mineko Itakura on bass and vocals, Mine Nakao on guitar and vocals, Fuseo Toda on guitar and chimes, and Tomoko Takahara on drums and flute. I first discovered this band when they opened for Gong at the Great American Music Hall in San Francisco last spring. I loved ‘em. III is, you guessed it, their thirrd release. It is the first to appear on Circular Reasoning, a "more accessible" division of noise label Charnel Music. They play, to my ears, a melodic psychedelic sound. It's a real guitar driven album, Mine is quite good at her craft, lots of nice licks here, plenty of pedal effects. Mineko's vocals are great, though her bass playing hasn't reached my ears yet. Fuseo adds to the mix with some nice churning rhythm guitar. Tomoko does a decent job, but the drums parts are a tad simple to me. The real stand out on the album is "Breath of Life," an eleven minute odyssey. This is a great song. Lots of cool guitar with wispy vocals. A dreamy, lazy song. The vocals are, of course, in Japanese, but don't let that scare you, it's the way they sing that matters. The remainder is nice pop/psychedelia. Of the six songs, all are 5-7 minutes long, and track 6 is from their first album. This isn't an earth shattering release, but has found some good rotation on my playlist.