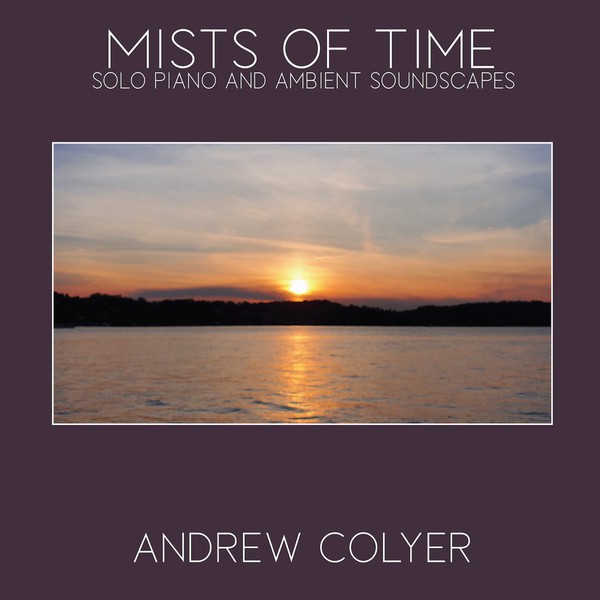 Andrew Colyer is a composer and multi-instrumentalist, primarily known for his piano and keyboard work in the band Circuline, but he has released some solo EPs and singles, and two full-length solo releases — one is a 2018 Christmas album and the latest is the twelve-track album Mists of Time, under review here, which is prodominantly a solo piano and keyboard endeavor. He has also played on Frank Wyatt’s 2019 release Zeitgeist, performs in the live version of Robert Berry’s 3.2, and a number of other recordings and touring lineups. While Circuline is a prog rock band with two vocalists, Mists of Time is an entirely instrumental solo outing, mostly piano with ambient keyboard soundscapes, although the closer “Serenity” features some muted vocals under the surface as well as other instrumentation — light drums and such. The opening cut, “Rain Notes Storm,” features drums as well, plus some guitar harmonics at the intro section, but for the most part this is a piano album with some gentle keyboard orchestrations. This might sit proudly next to albums by George Winston, Peter Kater, and others who employ mainly pianoscapes with plenty of ambience and space, even some of the works by Brian Eno. It’s beautiful, colorful, and gentle on the nerves — any listener can find plenty to enjoy in these tracks, and there’s enough variety here so it doesn’t become tiresome and samey. The tracks are succinct, most clocking in from three to four minutes, the exception being the eight-plus minute “Ghosts of Aberfan,” which amounts to a multi-sectional suite performed entirely on piano. Mists of Time is a solid effort that elucidates the emotion that Colyer clearly has his finger on.