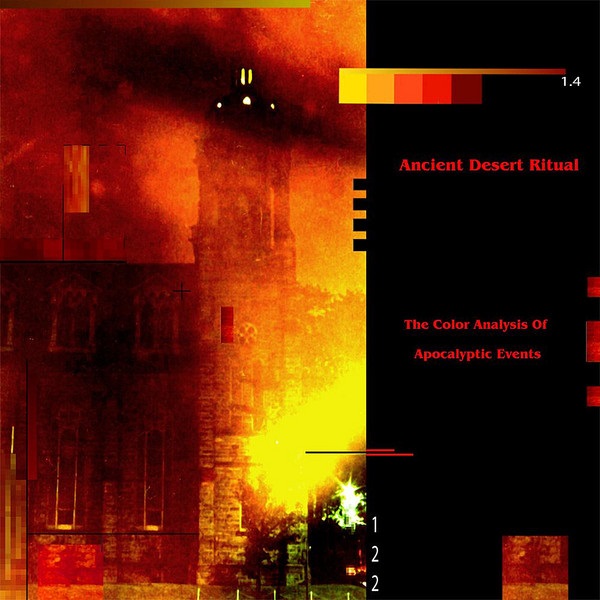 Ancient Desert Ritual, formerly ADR, started in 1994 by songwriter Glenn D. Clark. By 1996 the group had disbanded after releasing their first album, Walking in Sand. After moving to Austin, Texas, Glenn recorded and released his first solo album The Color Analysis of Apocalyptic Events, an intriguing title for this all-instrumental album. Glenn plays guitars, drums, Mellotron, and other keyboards to create some catchy progressive rock tunes that evoke, at times, Steve Hackett and Genesis. The music is a bit uneven, ranging from moments of brilliance to dull repetitions of phrases, a trap many solo artists can fall into when they are the only source of ideas. Fortunately, Glenn finds interesting ways to resolve these musical nadirs that crop up. “Snonado” is a great opening tune as it grabs your attention. The second track “Joyfulness” is another attention-getter with its upbeat electric and acoustic guitars and Mellotron. Then we hit the first hiccup with “Hold Em In,” which seems a bit out of place. I particularly like “The Carousel” with its eerie opening and then the title track where Glenn invokes Steve Hackett for the first time. Some of the other tunes have a Native American vibe. In the middle of the disc there is a change of pace with “End of the World Blues,” a slow bluesy tune that shows a different side of Glenn’s talent. The disc closes with the 10 minute “The Rave in Hell” that hits several low points but eventually generates some interest. Overall, an interesting but uneven release with a European prog rock feel.

Klaus Schulze - Kontinuum – With great anticipation I waited for the release of Klaus Schulze’s 45th solo album Kontinuum and I was not disappointed. Klaus has been reissuing lots of music lately, but it is two years since his...  (2008) » Read more