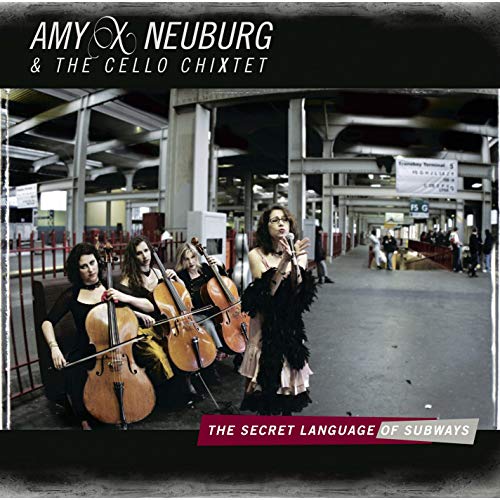 Putting cellos and Amy X Neuburg’s amazing voice together seems like a great idea, and by the end of the opening track, “One Lie,” I was hooked. On it Neuburg lays bare the lyrics accompanied by modest, yet cunningly effective strings. The three accomplished cellists — Beth Vandervennet, Elaine Kreston, and Jess Ivry — boast resumés with ties to international ensembles and various Bay Area orchestras. Their connections to experimental groups especially make them a good fit with Neuburg, whose work both as a solo artist and with Amy X Neuburg and Men has established her as a major force in avant-classical and modern music circles. But what makes this collaboration most effective is the way voice and cellos behave like a single organism. The 13 songs defy description, tying into a concept about how modern urban life reflects and affects personal relationships, creating the impression of a frenetic and stressed emotional condition. Besides the cellos, Neuburg occasionally supplies electronic percussion that pushes the material into techno realms, as seen on “Body Parts.” Songs like this and others will appeal to fans of RIO groups like Thinking Plague. But for my money this album hits pay dirt on cartoonish romps like “Difficult” and “The Gooseneck,” or when the vocal is allowed to soar over heavenly strings, as on “Be Careful” or the danceable “Hey.” As if it that weren’t enough, Exposé readers will appreciate the stunning cover of “Back in NYC” that caps off this remarkable album.