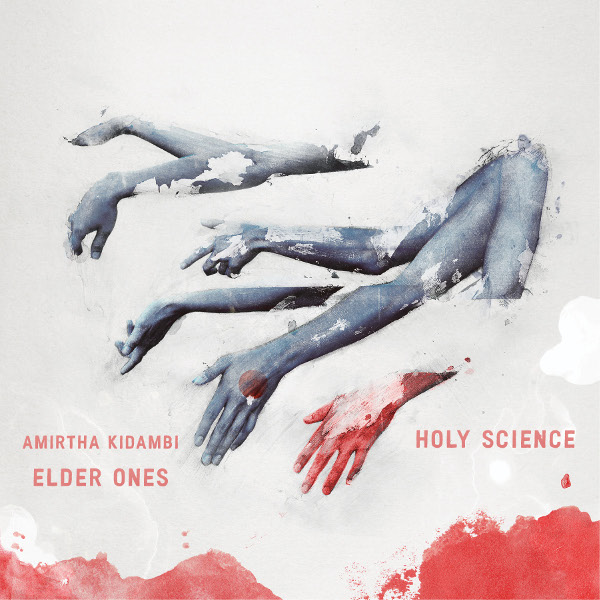 It is well known that John Coltrane’s music was influenced by exposure to Indian ragas. Here is a case where some of Coltrane’s ideas are applied back to South Asian traditions. Not that there’s really anything traditional about Amirtha Kidambi’s music — unless you count 20th Century avant-garde music and free jazz as traditions. With Elder Ones, Kidambi strives to combine her background in the work of Karlheinz Stockhausen and Luigi Nono with both the spiritual jazz of John Coltrane and Alice Coltrane and aspects of Carnatic music. She is the composer and contributes voice and harmonium; she’s joined by Brandon Lopez (bass), Matt Nelson (soprano sax), and Max Jaffe (drums). The harmonium at times provides a drone basis for the music, and at other times either doubles the bass or provides commentary. It’s an unusual tone color to have in such a context, which could loosely be called jazz, and gives the group a sonic calling card rather like Alice Coltrane’s harp did for Journey in Satchidananda. Kidambi’s singing does not involve words, being her own style of scatting, choosing syllables for their tone rather than meaning, and her voice is never a detraction from the music. In the hands (or vocal chords) of a lesser talent, such extended sections of vocalization might get grating or tiresome, but her melodic inventiveness and touch with phrasing and vibrato are impressive, and she never resorts to typical “dweedly-bop doo-wa” jazz cliches. She could as easily be singing in Sanskrit or Hindi or even Kobaïan, though her melodies are more Ella Fitzgerald than Bollywood or Nusrat Fateh Ali Khan. (There are parts of “Dvapara-Yuga” and “Kali-Yuga” that could pass for stripped-down jazzy Magma outtakes.) Nelson’s sax is Kidambi’s primary melodic foil, venturing into all sorts of tonal territory and never sinking into the sappy sweetness that soprano saxes are prone to — the precedent is clearly more Anthony Braxton than Grover Washington. The bass and drums slip seamlessly from grooves to freedom, both driving and coloring the four long pieces on the album. As with much music that falls well outside normal boundaries, it might take a few listens to get a feeling for what Elder Ones are doing, but the depth and musicality are impressive.

Panzerballett - Panzerballett – In my mind I picture the dancing of tanks — the cover art helps. But the only dance I can imagine is a slow, clumsy, brutish affair, most unlike the quick, dextrous, sophisticated music I hear....  (2008) » Read more