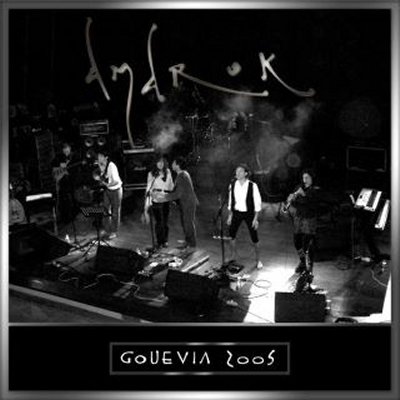 This set was recorded live at the Gouveia Art Rock festival in Portugal (yes, it's spelled wrong on the CD cover), and it finds Amarok in fine form. They play some of the most memorable tunes from their studio albums, featuring Quentadharkën (2004) most prominently. Nothing from Sol de Medianoche (2007) appears, so maybe they hadn't written any of that material as of showtime. The broad instrumentation of their music is handled ably by the seven musicians; bass, drums, and guitar are augmented by saxes, flutes, keyboards, and percussion, and there are occasional appearances by oud, didgeridoo, penny whistle, saz, and so on. As usual, vocals are divided between male and female singers, with Marta Segura's powerful voice being one of the most striking factors. Decades ago, Strawbs proved that folk-oriented music could be enhanced by injections of progressive rock, and Amarok applies that formula to their Spanish and Catalan background, spicing things up with a hefty dose of Arabic influence. At times, the woodwinds lend a hint of jazz to the proceedings. The spectacular title suite from Quentadharkën, at nearly 16 minutes, comprises a significant part of the set, and its multiple sections of varying moods show the band at their best. Tender sections of piano and flute contrast with tricky odd-meter sections where the electric guitar takes over. There's also what I believe is a new tune, with the English title "The Last of the Last," sung in English as well, and it's kind of a silly song telling the story of a man who lived in the forest for thirty years. The recording is very high quality, with very little crowd noise – in fact, a bit of the house sound might have filled out the crisp soundboard mix with some ambiance. Still, this is a great document of what must have been a great show, and for those unfamiliar with this band, an excellent place to start.