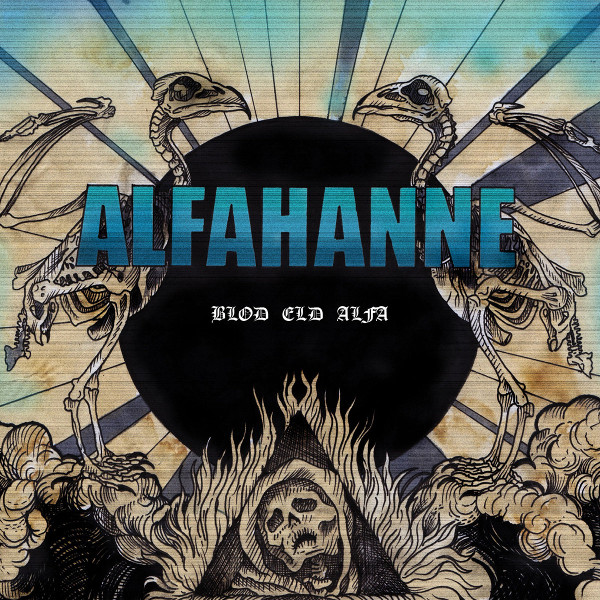 This Swedish band is related to the black metal scene, but they bring in a lot of elements from other styles as well. If they’ didn’t, Exposé probably wouldn’t be paying attention to them. After all, black metal is a pretty narrow genre, and I’m sure it has its own websites. But Alfahanne’s music has enough going on that it might be of interest to listeners outside that community, with a Gothic sort of mood and a little flavor of dark New Wave going on, maybe something like Sisters of Mercy. There’s also a slightly Middle Eastern tinge to some of the chord progressions and melodies. And maybe it’s only a strange thought on my part, but at times I think of what Joy Division might have sounded like if they turned into a metal band. Some of the vocals are on the harsh side, but to my ear it’s not so over the top that I’m repelled – just means this is not something I’m going to take in large doses. The lyrics seem to be in Swedish, though they’re delivered with such a guttural tone I at first thought they were mixing up Russian and Arabic or something. There’s some variety in tempos, if not instrumentation, and I appreciate the fact that the guitars are playing chords other than straight major and minor (or just open fifths, as might be more realistic) – there are some dissonant voicings, and often the guitar is playing melodic parts and the bass takes on the rhythmic chugging role. In a way this reminds me of the way some post-rock bands arrange their parts. I don’t recall any odd meters, and they might benefit from the occasional inclusion of an acoustic sounding instrument, something that’s not massively overdriven, but as it stands, Blod Eld Alfa is a fair sight more interesting than black metal, and likely can appeal to fans of heavy rock that moves outside strict genre confines.

Music Emporium - Music Emporium – Music Emporium’s self-titled 1969 album is one of the rarest gems of the late 60s LA psychedelic scene, with only 300 copies originally pressed and an elaborate die-cut sleeve. Unlike some...  (2005) » Read more