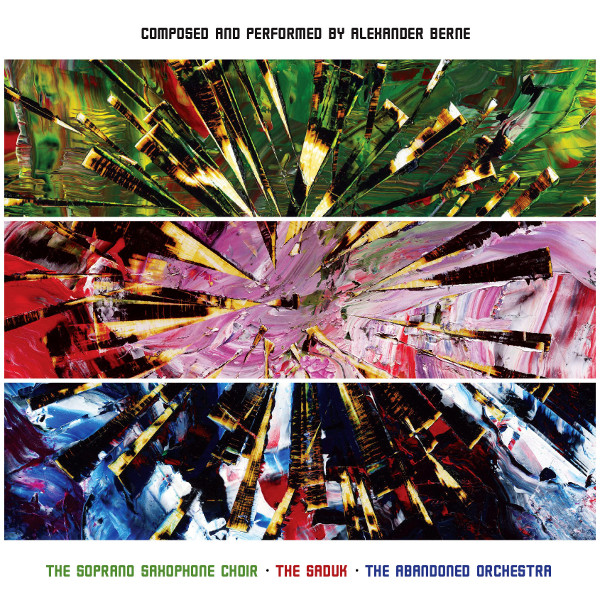 This lavish set presents composer / sound-designer / musician Alexander Berne in a variety of settings, mostly on his own, but with other contributors at times. Taking them in the order listed on the cover, we start with “The Soprano Saxophone Choir,” soprano saxophones backed by subtle soundscapes of indistinct origin. Mournful jazzy sax informed by sounds from around the world lays meditative melodies over the ambient notes that fade in and out. Occasional forays into more rhythmic territory find the saxes chattering and trilling like a flock of birds. This is not really a choir in any conventional sense, where you would expect harmonies and set compositions, just the use of multiple instances of the same instrument combined to create music. Disc two spotlights “The Saduk,” a cross between a saxophone and a duduk developed by Berne himself. It has a mournful sound similar to the duduk, mellower than a sax, and here it is often backed by sounds that are a bit more engaging than the ambience of the first CD. There are even subtle percussion sounds, though nothing approaching a steady tempo. “The Abandoned Orchestra” finishes out the package, and here the rhythmic aspect picks up a bit (even featuring what sounds like – gasp! – a drum kit), though hardly to what you would call an energetic level. The closest comparison I can think of would be the Hassell / Eno collaborations, music which inhabits the intersection of electronic, jazz, and contemporary avant-garde; when it comes to music nearing the ambient end of the spectrum, I find this much more interesting and enjoyable than much of what’s out there. Of course, “interesting” may not always be what you’re looking for in ambient music.