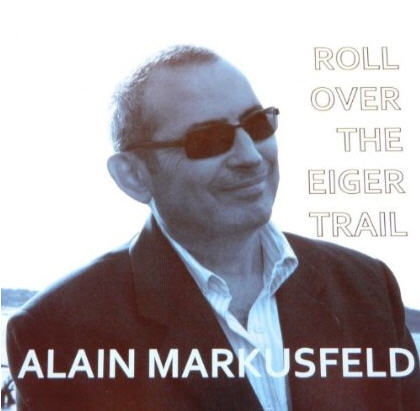 This is kind of a confusing release, not only because Markusfeld hasn’t released any new full length recordings since his double Live album in 1981, but also because the track list showed several cuts that were on his late 70s albums Le Desert Noir and Platock. Those in the know have heard his releases on the now defunct Egg label, and as none of those have been reissued in digital format yet, so I sprung for it, figuring I had nothing to lose. So this CD turns out to be an archive, about half of the playing time (the first six cuts) comprise works heretofore unreleased from 1989 onwards, and the last seven are culled from the two aforementioned Egg label albums, just newly mastered versions of the same studio recordings. Since probably most are familiar with those older cuts, I won’t go into great length on them here, other than to say from Le Desert Noir we get the title track, “Bulgaro-Feld,” “Hot Love,” and “Atlantis Rock”; and from Platock we get “Fayava” and parts two and three of “Platock.” Full digital reissues of those albums (as well as the two later Egg albums) are still badly needed, but this best-of selection will certainly do for now. Launching the disc is “De Retour au Guerzido <<Tempete>>,” a piano based jazz piece from 2010 featuring plenty of hand percussion, string bass and some sax soloing, it’s a little reminiscent of the late Vince Guaraldi during his Peanuts period. We then move backward a couple years to 2008, for the the three minute introspective orchestrated piano lament “Automne à Bachalapsee,” the orchestrations provided by judicious applications of synthesizer. “Roll over the Eiger Trail” is the third cut, the longest (at 10+ minutes), and the newest, recorded in 2011. It’s a strong organ based jazz piece, in some ways similar to the opener, though one might rightfully suspect we have drum programs at work, and a mix of synthesized saxes along with the real deal, and synthesized orchestrations. Still, this is probably the strongest cut among the newer, previously unreleased material. 1989 is represented with parts 7, 8, and 9 of “Le Fleuve,” obviously a longer suite much of which remains unrecorded or unreleased. Here, Markusfeld is using a lot of synths in his jazz based compositions and some of that – especially on part 7 sounds fairly experimental for the time, possibly inspired somewhat by Zappa’s Jazz from Hell, though not as aggressive, and far more emotional and melodic. The latter two parts are also interesting, but the use of very obvious drum programs clouds the air; the music would have been served far better by the real thing rather than this electronic chatter. Still, this is all really good stuff, but any listener familiar with his pre-1981 material might be wondering why he no longer plays guitar. I am wondering the same thing too.