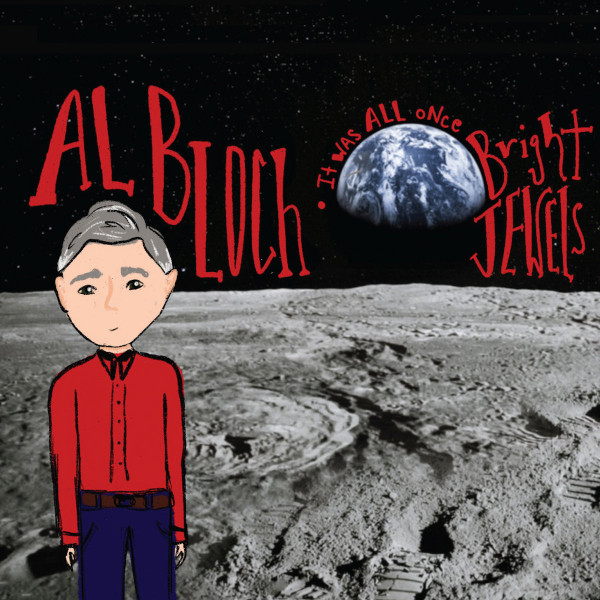 Moving along from the archival collection by My Favorite Martian, Al Bloch presents It Was All Once Bright Jewels, his first solo album in a career that stretches back to the early 80s with a half a dozen different bands. The 14 songs cover a fair amount of territory stylistically, built on a foundation of energetic rock with catchy melodies. The bulk of the music was played by Al (vocals, bass), brother Kurt (guitar, vocals, keyboards, plus production), and Kevin Fitzgerald (drums), with one track featuring Kurt’s band Fastbacks — Lulu Gagiulo (guitar, vocals), Kim Warnick (bass, vocals), and Mike Musberger (drums). As the story goes (told in Al’s amusing piece that accompanies the album), Al hadn’t written any new music after moving to Virginia in 2001, but after Green Monkey had such an enthusiastic response to the My Favorite Martian collection and his 1980 band Wenis, and label boss Tom Dyer talked him into giving it a whirl. Most of the tracks are short and catchy — as he writes, “I like short songs best, because I have a short attention span.” Many of the songs rush by at a quick clip, and it’s charming to hear Al struggle to get the words out at that pace. I suppose that could have been fixed digitally, but they wisely chose to let it stand, and it really enhances the naturalness and honesty of the songs. Many of the lyrics are full of local details from the places he’s lived, mostly Seattle and Los Angeles. There’s one cover included in the set, John Cale’s “Amsterdam,” done in a lovely arrangement with sparse electric guitar chords and e-bow harmonies. The more upbeat tunes could be described as Ramones rock bumped up a notch by an infusion of Big Star melodies and harmonies. I’ll give a special callout to “Better Days,” which stretches to eight and half minutes and (as Al writes) “Kurt Bloch played all the keyboards, and he was definitely wearing a cape while recording this song.” After a slow-burning three minute song, we get a smoldering organ, string synths, and interlocking melodies on synthesizers, working into a supremely effective instrumental buildup to an emotive non-shredding guitar solo. It Was All Once Bright Jewels is an effective antidote to slickly produced albums that could have been produced by algorithms instead of human musicians. And let’s hope it’s not another 20 years before Al Block sees fit to write some new songs.