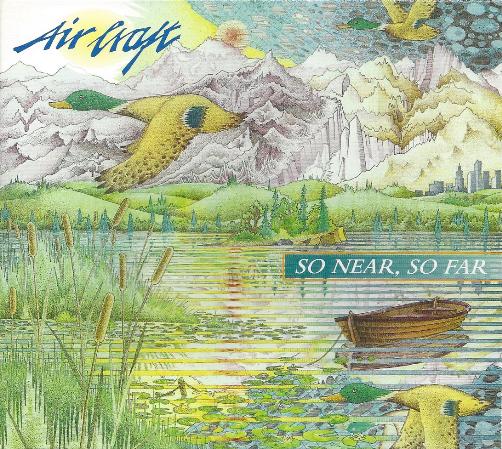 After the death of progressive rock at the end of the 70s, some of the survivors kept their band names and turned to more commercial endeavors, or else they were driven deep underground where self-production and private releases were the name of the game. After a few years had passed, the emergence of a whole class of new instrumental music that didn’t fit nicely into any convenient pigeonholes was branded “new age music” by the music marketers with releases handled by several boutique labels. It actually had no single recognizable sound other than it didn’t sound like punk or pop or rock or anything else teenage kids were buying, so it went into the New Age section. There, one could find new releases by Mike Oldfield, Kraftwerk, Anthony Phillips, Pekka Pohjola, Jade Warrior, Do’a, and others that existed on the fringes of the old school progressive sound, as well as a number of emerging new artists embracing an instrumental approach fused with elements of jazz, classical, world music, and sounds that might be suitable for soundtracks. Against this backdrop, Air Craft was born in the mid-80s, and signed to the Catero label for their one and only LP release So Near, So Far, which is finally seeing its long overdue release on digital medium.

The group consisted of principals Doug McKeehan (piano, keyboards, chief composer) and T. Bruce Bowers (violins and programming), who handled the album’s production, along with bassist Myron Dove and drummer Jack Dorsey. The album starts with the “Opening (First Step – Vision)” track is a powerful piano-based piece with a sort of Dave Grusin type vibe that would have fit nicely on the On Golden Pond soundtrack, the second half flooded with beautiful strings and synths, and like everything here is meticulously arranged and produced. Things get even more interesting with the second cut “Pentacle,” pushing some classical piano ideas and South Asian / Middle Eastern melodic themes into a more overtly jazz setting, Dove and Dorsey keeping the pace nicely while violin and piano go off in more exploratory directions. The title track features a wandering melody with a distinct but not too obvious Asian feel and a jazzy approach at the bottom end, all driven by ever-present piano riffing. Most of the tracks are on the longish side, maybe six to seven minutes, offering the ensemble plenty of room to stretch out and explore ideas. One exception to that is the succinct and playful “Thingamajig,” with its joyful spirit and alternating rollicking roles for violin and piano, which leads directly into the original LP closer “Valley of the Lord,” a dark and powerful piece with multi-tracked strings and an engaging percussive rhythm, eventually disappearing into a long fade. “Wilderland” takes a slightly darker but orchestrated approach with powerful melodies and a pulsating bass groove at the bottom, and again, some jazz and classical all fused into something that might fit nicely into a cinematic setting. A bonus track, “The Healer,” which was intended for a second Air Craft album that never came to fruition, is a monument to powerful melodies fused with world rhythms, and hints at some of the work McKeehan would later do in Ancient Future, from the Quiet Fire album onward. If one enjoyed 80s releases like Lanz and Speer’s Desert Vision, or Kindler and Bell’s Dolphin Smiles, this very impressive but lesser-known release by Air Craft should definitely please the ears.