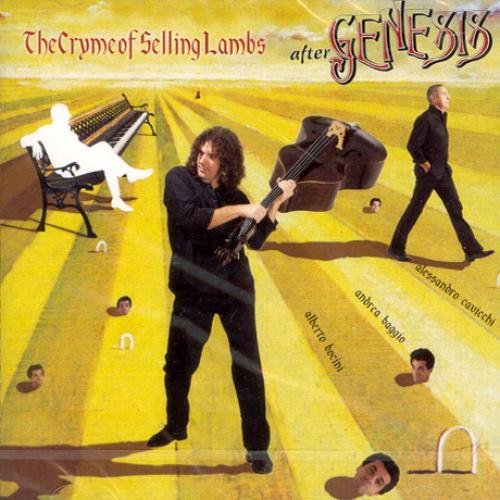 Classical aficionados are well familiar with the concept of reinterpreting compositions from composers alive and dead. It’s different for rock music, as we overwhelmingly prefer the original artists, but there’s still room for creative dissection as these Genesis tributes attest. Classical artists Alberto Pocini (see The Bass Gang in this issue) and Alessandro Cavicchi present Genesis on contrabass and piano respectively, with sparse digital treatments and voice by Andrea Boggio. This is entirely Gabriel-era, including a 35 minute Lamb suite. Missing in these projects is the power available in a rock ensemble, but the intrinsic beauty is left intact, sometimes emphasized. The Lamb’s title track is a case in point, building as it does to its ever-familiar refrain; but rather than the sweeping glory one expects, they treat it with a poignant understatement, placing it in the context of a fond, bittersweet memory. Boggio’s treatments also help place the proceedings in the hazy cloud of the past, while Cavicchi’s arrangement alters the track order almost entirely, making for an unexpected yet satisfying journey. “Firth of Fifth” follows, expanding on the original by a few minutes. My initial motivation for investigating these Genesis tributes was a casual enthusiasm for piano music. However, one of the beauties of After Genesis is the ability of the contrabass’ sustainable notes to sing the vocal lines as well as provide for many achingly beautiful moments, as Pocini rings such heartfelt emotion from his instrument. I’d love to hear them tackle PFM or Banco!