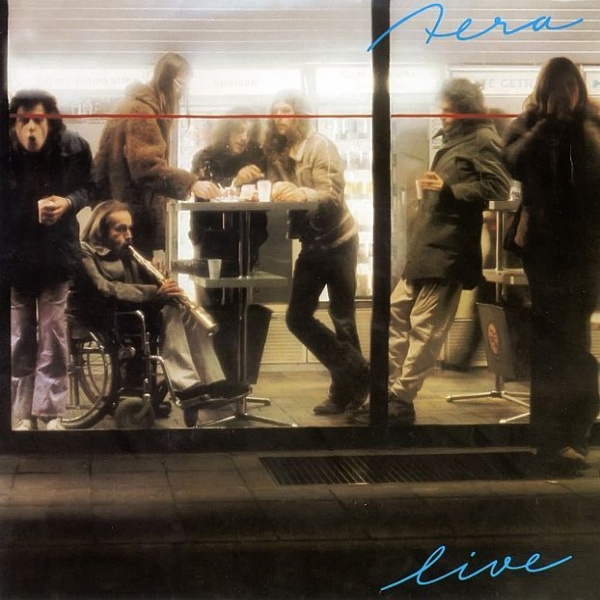 Last issue I covered the reissue of the first two Aera albums, and now Erlkönig present the band’s third studio effort and their live album. Türkis finds the band almost completely changed during the two years since their previous album, leaving only reedman Klaus Kreuzeder from the previous line-up. Most significantly, guitarist Muck Groh, one of the band’s main attractions, is gone (except for an understated guest appearance on one track), and they decided not to replace him, providing instead more room for Kreuzeder. The musical direction is deflected away from the Middle-Eastern influences and more toward straight fusion. Normally I would count this a loss, but they do it so well I can’t complain. This album can stand up to comparisons with the best Passport had to offer (especially by this time in their history), with solid compositions, great grooves, and hot playing all around. New bassist Matz Steinke gets in some amazing licks, playing a role similar to what Jaco Pastorius did when he was in Weather Report, laying down some serious funk and managing flashy fills and fluid leads within the groove; Steinke is also the primary composer, with drummer Lutz Oldemeier a close second. By November of 1979, when the live album was recorded, the band had recruited two Embryo members, Roman Bunka (guitar and vocals) and Locko Richter (bass). While there’s a certain charm to Bunka’s wailing psychedelic guitar, his vocals are wholly unnecessary, if not exactly unpleasant. Richter’s playing is serviceable, but can’t help but suffer considering the huge shadow of his predecessor. The highlights of the set come from Kreuzeder and the percussion, with as many as three players filling up the rhythms. There are also some freeform moments of noise manipulation – hard to say exactly who’s doing what there. While Live doesn’t add anything significant to Aera’s legacy, it can be seen as a good bonus disc for the purchase of Türkis.