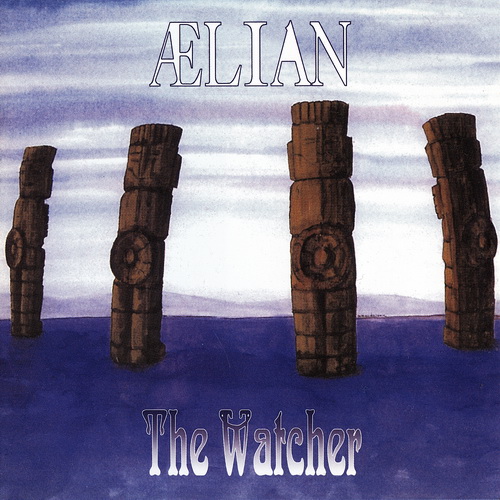 This is one of Musea's new releases, a label which for many years I considered infallible, but in the last few years they have occasionally proven me wrong with releases like Fancy Fluid's first, Overdrive, Deyss' first and others. Case in point: Aelian is a new Italian four piece of g/k/b/d, with the bassist doubling on lead vocals. The music is definitely neo-progressive for the most part, but in this case it's not necessarily a negative, they do fairly well, comparable to bands like Now and Sinister Street. The problem, once again, is the vocalist, with his laughable imitation Fish-like emotions, which are only eclipsed by his lack of understanding of the subtleties of the English language in which he's trying to sing. Add to that two very cheesy pop tracks that break the album's continuity, and you have a near total disaster. Fortunately, they did put an excellent instrumental on as the second track, and there are plenty of instrumental stretches in some of the other tracks as well. Still doesn't save it, though, when judgement comes down. These guys (unlike the previous) do have potential; I think a good recipe for a second album would be to skip the poppy drivel and stick to Italian vocals.

Musea tends to release two kinds of music: reissues of excellent obscure progressive bands and debut efforts by contemporary bands. The latter can be broken down further into bands that learn from the past masters of the genre and extend progressive music to new horizons and the “wanna be” progressive bands that only hint at possibilities.

Aelian is one of these latter neo-progressive bands. Hailing from Italy, they root their music in bands like Yes and Styx. Unhappily they are bland imitators without understanding instrumentation and lyric writing. Too much happens in their music. As Robert Browning so aptly put it, “Less is more,” and Aelian would have benefited by not filling the available sonic space with instruments. You can pick out individual instruments, but Maurizio Antognoli’s keyboards are mixed way below the drums and bass. Vocals are not Aelian’s strong point yet there is only one instrumental. Aelian’s music improves by quantum leaps when they are not making space for their lead vocalist Mark Aixer. He occasionally trips over English and often the lyrics do not make sense. Take for instance this line from "You Don’t Touch Me": “How can I do to explain to you / that you break my heart like an innocent crime”; this line from "One Dream All Together": “We tried to slide in the dark side / but the lamps of envious lights up / the corner of a blind man”; and this line from "The Sun Will Shine Again": “Is there someone of us / who can merit unended whiles?” Then there is the quasi-“yellow peril” song "Y. F." inspired by “A Chinese Ghost Story,” which suffers from the almost racist refrain “And yellow faces in my eyes.” Aelian has the potential for being a good band once they gain more experience in song writing and playing live.

Zaragon - No Return – At some point in the past I had heard this obscure Danish five-piece compared with IQ. In fact, after finally hearing it, that assessment seems to be quite inaccurate. Yes, there are some...  (1995) » Read more

Il Sistema - Il Viaggio senza Andata – Ciro Perrino has been Mauro Moroni's right hand man at Mellow Records, so it's not surprising that many of the lost relics released by that label include him and other members of the short...  (1996) » Read more

Spring Heel Jack - Treader – You might think that the modern sounds of drum & bass are not the territory of Exposé writers, that there is no cross-reference point. Shouldn't we put head into the sand simply to...  (2000) » Read more

Mal - Memory Overflow – Memory Overflow is a demo from Malcolm Humes, who plays guitars, synth, loops, etc. The disc contains some very rough mixes from the catalog of his recordings throughout an 11-year period from 1985 to...  (1997) » Read more