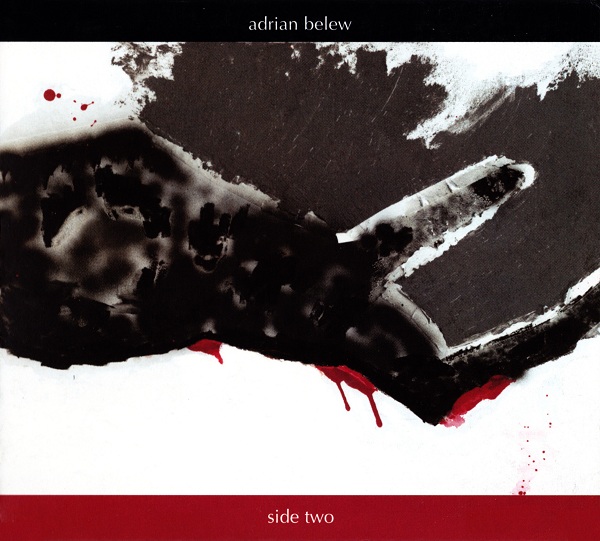 Adrian Belew has taken up painting, the kind with a canvas and brushes. The cover of this disk features his first ever work, an abstracted depiction of the dog he accidentally hit and killed while out driving one day. Coincidentally, the first track on this CD is called “Dead Dog on Asphalt” and it ushers in an album replete with angular melodies, dissonant electronica, keening wammy-bar guitar, and techno percussion. Vocals are sparse, often a song title lazily repeated as icing on the cake, though even the longer verses take on poetic resonance (Belew claims he wrote everything in haiku form). The spaciousness of the vocals beautifully suits the arrangements that, though often multi-layered, never feel cluttered or dense. This is the most atmospheric I’ve ever seen Belew with many songs thickly textural (“I Wish I Knew,” “Sex Nerve”) even while pushing the edges with harsh Fripp/Pinhas guitar or searing electronics. This applies to the more rhythmic tracks (“Face to Face,” “Then What”) that, while more accessible, never leave the vaguely bleak and disturbed mood infecting this disk. Just about the time you being to wonder if Belew needs some counseling he pops up with the closer “Sunlight” that, with its modal and ethereal arrangement glued to a low-fat techno rhythmic drive sounds like a modern take on “Tomorrow Never Knows” and leaves you with the sense that Adrian’s just fine. Like all good artists, he’s just letting us know how he’s feeling today. Recommended.