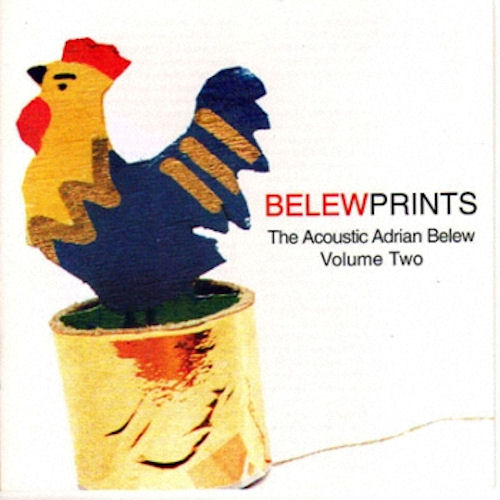 The second volume of acoustic performances by King Crimson lead vocalist Adrian Belew is a different reading than Volume One from a few years ago. No bones about it, Belew is a gifted composer; his songs stand up with or without added arrangements. I suppose that's the true testament to a song, sung by itself with only minimal accompaniment and one hundred percent inspired delivery. There are many gems to investigate here, including three new sound collages (the best being the combination of the other two): "Nude Wrestling with a Christmas Tree," which is like a musical samba through the jungle of Belew's demeanor. Also there are two Crimson pieces: "Cage" and "Dinosaur." "Cage" benefits from an acoustic guitar rhythm backing, while "Dinosaur" still has an impressive power even without the punch of a Bruford / Levin bass / drums combination. Then there are the nine solo album reworkings split between guitar or piano tracks (depending on how the song was conceived). Piano-based recordings include "Everything," where Belew lyrically relates his astute experience as a true romantic. One of two priceless performances come from the opening track, "Men in Helicopters," which benefits from an extremely Beatlesque string quartet backing. The last is the surprise live recording of The Beatles Anthology single, "Free as a Bird," sung missing the second verse (he knew the original Lennon track from a bootleg). As lyricist and vocalist, Belew succeeds at placing focus directly on his impassioned singing. His personal recollections and smart pop psychology again confirm his multi-faceted genius. Disc sleeve notes include a timeline account of Belew's work on these recordings.