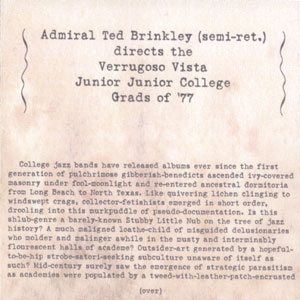 Here’s something that came right in out of left field; the artist, title, liner notes and everything else about this disc appear to be some kind of prank – except for the music, that is. The nine musicians here (playing piano, drums, bass, saxes, clarinet, trombone, flute, guitar, etc.) all have ridiculous assumed names (Jeopardy Ed, Helena Handbasket, Convoy Denver, etc.) including “Brinkley” himself, who this writer believes is actually none other than Graham Connah (of Jettison Slinky), although I could be wrong. A visit to the website lists in the fine print participation of several Slinkies (Alex Candelaria, Ches Smith, Marty Wehner, and vocalist Nancy Clarke) as well as some other Bay Area noteworthies (Erik Pearson, Jewlia Eisenberg, Elaine DiFalco, Beth Custer). Musically we’re in busy, spirited jazz territory here, but it’s definitely the tightly composed ‘orchestral jazz’ side, with occasional hints of folk and avant-garde between the measures; the vocal parts may remind of Hatfield, National Health, or even some of Zappa’s works. But even given all that, there still seems to be plenty of room within the compositions for the musicians to stretch out, blow a solo, improvise, and even go ‘free’ from time to time. The eight tracks cover a lot of ground, but remain true to a central conceptual ideal, which is indeed one of the major strengths of this release. All taken, a real treat for the ears.