Word reaches us that German electronic musician Adelbert von Deyen has died. His recorded legacy reaches back to 1978, when Sky Records released Sternzeit. Von Deyen, who was born October 25, 1953 in Süderbrarup, was also known as a painter and graphic artist. 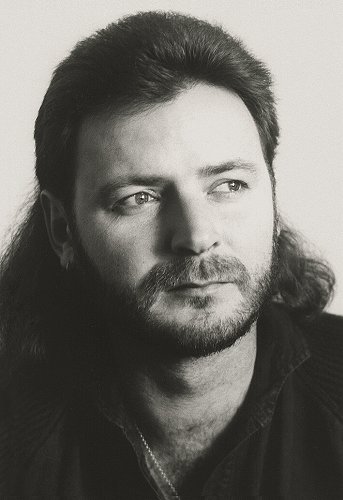 Von Deyen released nine albums on the Sky label through the 80s, performing live both solo and with other musicians. He was known for eleborate staging and light shows. He ceased recording during the 90s after the death of long-time collaborator Dieter Schütz, to devote himself to painting. His paintings have been shown widely the Schleswig-Holstein region where he lived.

When he resumed his musical activities in 2006, he released his work independently. In 2016, Bureau B began reissuing his early albums.

Miriodor - Jongleries Élastiques – For their fourth album (fifth if you count the cassette that came out between the first and second), Miriodor has again pulled out a long list of surprises. Their sound is rooted in the chamber rock...  (1996) » Read more

Sincronia - Odisea del Tiempo Eterno – I'm not much for programmed synths and drums in a classical rock/symphonic format, and there seems to be a lot of these coming out. Our dear Editor requested that I review this album with full...  (1995) » Read more

Planetarium - Infinity – Or is it Infinity – Planetarium? Most sources go with Planetarium being the group yet Vinyl Magic seems to have this listed as Infinity. Either way, this group is certainly lucky to have their...  (1995) » Read more

David Parsons - Earthlight & Jyoti – Parsons is a New Zealand based composer with fifteen or so releases to his credit going all the way back to the early 80s; his work tends to draw its inspiration from his extensive travels throughout...  (2010) » Read more