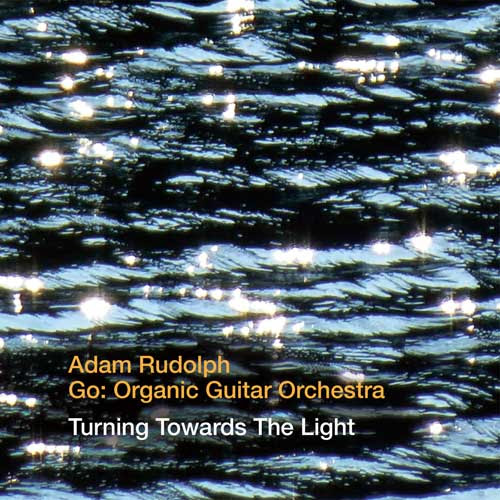 When it comes to Adam Rudolph’s music, I really need to stop having any expectations. His recent Hu Vibrational release featured a battery of percussionists playing music more spacey than rhythmic, and with Turning towards the Light he redefines what an ensemble of guitarists can be expected to do. It’s the latest in his ongoing series of Go: Organic Orchestra assemblages, which seek to provide new options for how “orchestra” can be defined. In previous outings, Go has consisted of a wide variety of instruments from musical traditions around the world, all organized under his “improvisational conducting” rather than playing composed scores. This time, the Orchestra consists of 11 guitarists: Rez Abbasi, Nels Cline, Liberty Ellman, David Gilmore, Joel Harrison, Jerome Harris, Miles Okazaki, Marvin Sewell, and Kenny Wessel (all on electric with effects); Marco Capelli (acoustic with effects); and Damon Banks (bass). In addition, Harrison, Harris, and Wessel contribute some extras like National steel guitar, lap steel, and banjo. Of course an electric guitar with effects can sound like just about anything, so the sonic pallette here is more or less infinite. There is a lot of esoteric theory behind Rudolph’s process, some of which is hinted at in the liner notes, but it’s the kind of thing that makes little sense when you read about it – apparently it makes more sense when it’s being created, since the result is so engaging. Much of the time, subsets of the full ensemble are engaged (there’s some indication of whose sound is on the left and whose is on the right on each track), and the music is much more sparse than you might expect. The prodigious technique that was in the studio is tempered by both Rudolph’s vision and a kind of collective spirit where all players contribute their little bit to a whole that is (as they say) more than the sum of its parts. Turning towards the Light is a fascinating listen, and further evidence that Adam Rudolph is one of the great musical thinkers of our time. I think he’s onto something.