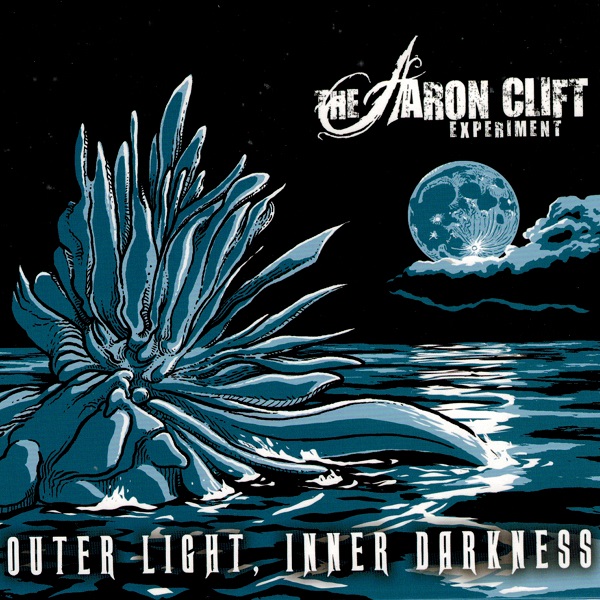 Well, apparently, there’s still more life in the old beast we call Progressive Rock. Aaron Clift and his cohorts have a take on music that has no hints of Neo-Prog, doesn’t really sound like any of the 70s innovators, and also doesn’t fall into the post-Porcupine Tree variety of modern progressive that is so prevalent. Just as more complex machines have more ways to break down, the more complex your music is, the more there is to go wrong. At every corner, there are decisions to be made, and messing any of them up can lead to disaster, or at least lameness. The Aaron Clift Experiment makes consistently good choices. The music on Outer Light, Inner Darkness is complex, but the complexity is not a fetish – it’s done in service of a musical vision. It’s melodic, with unpredictable chord progressions and sections that change mood, tempo, and nearly anything else. There are sections of polyphony, massive, majestic harmonies, and quiet, moody sections. Clift’s voice is clear and expressive, and never slips into the breathy tone so popular in prog these days. His keyboard playing generally centers on piano, though other sounds appear from time to time. Much of the time, the role that might normally be played by synthesizer or organ is filled by the string ensemble, and it is their presence that provides another major positive factor. Eric Gutierrez’ guitar playing is fluid and tasty, flashy but never overwhelming the rest of the band. Bassist Devin North gets a nice solo spot in “Kissed by the Sun,” but he’s excellent throughout. And Joe Resnick holds it together from behind the drum kit, providing superb cymbal work and navigating every odd meter without ever sounding like he’s doing anything out of the ordinary. It’s an outstanding album from start to finish, and my only complaint is that the lyrics on “Aoide, Goddess of Song” tip over the edge into pretense – writing a paeon to a Greek goddess is a difficult choice, and perhaps impossible to pull off in this day and age. That’s a minor misstep, and shouldn’t be taken as reason to avoid this excellent release, sure to be in the running for progressive rock album of the year.

The latest album from Austin’s little secret, The Aaron Clift Experiment, has hit the streets and what a gem it is! Aaron is an intelligent, literate, and consummate composer. Outer Light, Inner Darkness is a giant step forward from his 2012 album Lonely Hills. Each song is perfectly orchestrated and performed. Today the band consists of Aaron Clift (vocals and keyboards), Eric Gutierrez (guitars and mandolin), Devin North (bass), and Joe Resnick (drums and percussion). Each musician contributes equally; the result is not a wall of noise, but carefully constructed interactions that allow each to shine. The opening song “Kissed by the Sun,” which also happens to be their first single from the album, is an energetic progressive metal tune in the Porcupine Tree mold, but in style only. Devin’s exceptional bass work is a noteworthy accompaniment to the complex shifts in tempo, harmonies, and melody, as well as Eric’s beautiful guitar solos. The second song, “Locked,” is a bluesy-jazz song that turns a bit melodic, propelled by Aaron’s vocals and Eric’s guitar. “Fragments of Sleep” takes you in a different direction. Aaron’s keyboard work is prominent and out of nowhere a string quartet enters the mix, which is so much more enjoyable than listening to synth string patches! The music takes a dark turn on “Your Arms Hold Them to the Dark” with its eerie Gothic mood that somehow conjures the darker moments of Pink Floyd’s The Wall. “Aoide, Goddess of Song” is Aaron’s paean to creativity. And everything up to this point is a prelude to the exquisite chamber music/progressive rock opus of “The Last Oasis.” Aaron’s compositional talents shine on this song, integrating a pseudo-classical string quartet with prog rock elements. “The Last Oasis” segues seamlessly into “Moonscape,” a WWI anti-war song in three parts. Then “Moonscape” segues into the album closer “Bathed in Moonlight.” These final three songs share some common elements with Roger Waters and David Gilmour, subject matter and guitar work. “Bathed in Moonlight” is also very visual music. It is simply beautiful and perfect for a balmy night under the moon. As a bonus there are two additional tracks, an acoustic version of “Your Arms Hold Them to the Dark” that is more sinister than the album track, and the single version of “Kissed by the Sun.” The band played this entire album at their release party in late August, but even thought they gave an outstanding performance, they could not recapture the magical subtlety of the music on the album. The Aaron Clift Experiment is deserving of notice of more than just the local Austin music scene. Highly recommended.