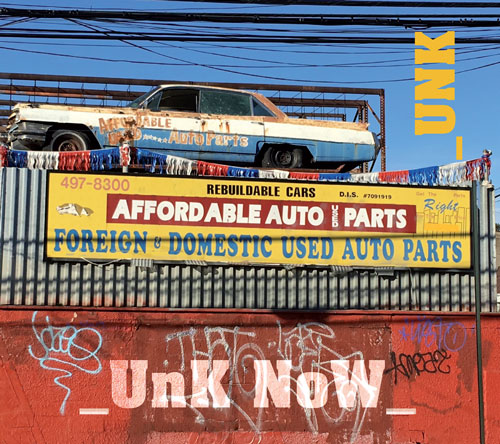 _UnK is about one of the strangest band names I’ve seen in all my years of reviewing records. Is it a partial word with the underscore at the beginning representing a missing letter? “Punk” maybe? They definitely run with the energy of punk, but the sound is more that of jazz-rock, and they certainly do an amazing job at it. “Funk” is another possibility that’s somewhere within the realm of what they do. So the question remains open, and the title NoW_ with beginning and end capitalized with the underscore at the end is equally strange. The group has been around since 2015, and I’m pretty sure this is their debut release six years on. Their sound is tight and crisp, not a bit of slop anywhere. The group consists of Jean-Baptiste Rubin (alto and baritone saxes), Mathieu Millet (compositions and double-bass), guitarist Christoph Maerten, and drummer Charles Duytschaever, and despite the distinctly non-French looking names of the latter two, they hail from Lille, France. Then again, Europe is a small continent, musicians can easily collaborate cross borders no problem. The material herein is energetic, contemporary, jazz-tinged rock, easily categorized as progressive, but also somewhat experimental in overall feel, and as mentioned previously, all of the music here is tightly composed, with solos forthcoming from all of the players, guitarist Maerten giving an especially superb performance on “Patate Douce,” working in tandem with Rubin’s saxes. One of the cuts that bassist Millet did not compose is a beautiful arrangement of Olivier Messiaen’s “O Sacrum Convivum,” also one of the few tracks with a slower pace and gentle touch, absolutely beautiful. The near-eleven minute “Zur” also mixes it up nicely, jumping from soft to hard grooves and back again, with plenty of improvisation thrown into the mix. NoW_ is a solid album that should give the adventurous listener plenty of repeat plays.