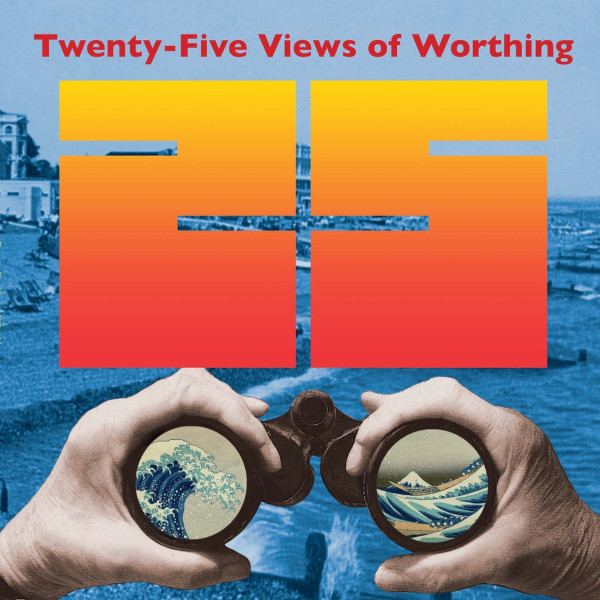 The story of the band 25 Views of Worthing is a fascinating dip into an obscure corner of British music of the 60s and 70s. In 1967, a psychedelic band called Primrose Path was doing damage (sometimes literally) on the scene with their theatrical stage show, which included pyrotechnics, costumes, face paint, and other special effects. The group featured Roger Hillier (keyboards), Mark Sugden (vocals), Martin Harvey (violin), Phil Howard-Jones (bass), and Gordon Hale (drums). By the end of 1969, the Path came to an end, and Sugden and Hillier got together with Paul Devonshire (woodwinds) and Paul Lindsay (bass), with Sugden switching to drums (he’d also played trumpet in a trad jazz band called King Commode). They took their name as a play on Hokusai’s famous print series “Thirty-Six Views of Mt Fuji,” calling themselves Twenty-Five Views of Worthing. All of the musicians had a background in jazz, and Hillier became the primary composer, basing many of the pieces on group improvisations. Their music was primarily instrumental, and influenced by such Canterbury bands as Soft Machine and Caravan. By 1971 they were playing shows with Argent, Patto, Mott the Hoople, Caravan, and Roxy Music. Hilliard’s former bandmate (from before Primrose Path) Phil Brown was by this time working at Island Records, and the Worthings signed with them, leading to shows with Genesis as well as opportunities to record. They invited friends into the studio to flesh out the arrangements, including trombone and a small choir of female singers. In 1973, a shakeup at Island led to the end of their contract before they had enough material for an album; they still had shows booked, but without the financial support of an agency, found themselves in dire financial straits. Lindsay was the first to depart, replaced by John Knox, and Pete Teychenné (trombone) came on board. After some shows and makeshift recording sessions, Devonshire left, but by 1974 the band no longer existed, with the members taking on day jobs or pickup musical gigs. Around a year later, the Worthings started to come back together, with the core of Hilliard and Sugden bringing on Harlan Cockburn (guitar, vocals), Paul Gillieron (sax, keyboards, vocals), and Malcolm Barrett (bass). With the new members came access to a studio, and more recording took place, eventually to be released as a limited-run EP called 7”. By 1977, without any formal breakup, the band fizzled out, with members moving on to other pursuits, musical and otherwise. Sadly, Sugden died in 2019, and so never saw the proper release of the band to which he devoted so many years. Enough of the history — how is the music? The closest reference is probably Hatfield and the North, though the Worthings have more jazz in their sound with the increased presence of woodwinds and trombone, so a bit of Soft Machine Third might be detected. But really, this band has a sound all their own, and anyone who enjoys the Canterbury scene should be intrigued by this long lost treasure. The tracks from ‘77 are more concise and song-oriented, but still having that Worthing essence and touch of cheerful insanity. This is music that richly deserves to see the light of day, and Wind Waker Records should be commended for this superb package and well-researched book full of interviews, recollections, photos, and press clippings.