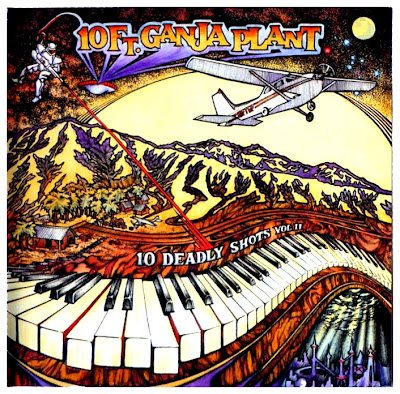 By the band name alone you should have a very good guess about the music contained on this disc. 10 Deadly Shots Vol. II is the second release in 10 Ft. Ganja Plant's on-going instrumental-onlyseries of authentic Jamaican dub and reggae songs. These guys are neither copycats nor worshippers at the temple. They know how to construct and deliver joyful dancehall tunes. Not much information is available about them other than they are, surprisingly, a group of white guys from New England. 10 Deadly Shots Vol. II features guest musician and Hammond organ virtuoso Roger Rivas from The Aggrolites. His lyrical playing is reminiscent of Booker T. as well as Brian Auger. He provides an extremely strong presence to the Plant's already solid foundation. The ten songs on this disc offer a variety of entertaining Reggae styles. The opening track "Rooftop Duel" is a fun song that grabs you and swings you out onto the dance floor with its simple rhythm and cool organ that just sings to you. Other strong points are "Asking Hand" with its nod to the master Bob Marley, "Invincible Butcher" with a funky wah wah organ, "Fist of Yuen Kay-San" sounding like a martial arts movie with lots of organ trills, and "Red Boat Opera" flirting with spaghetti Westerns. This plant continues to grow and flourish. All in all, this in one disc sure to leave a smile on your face.