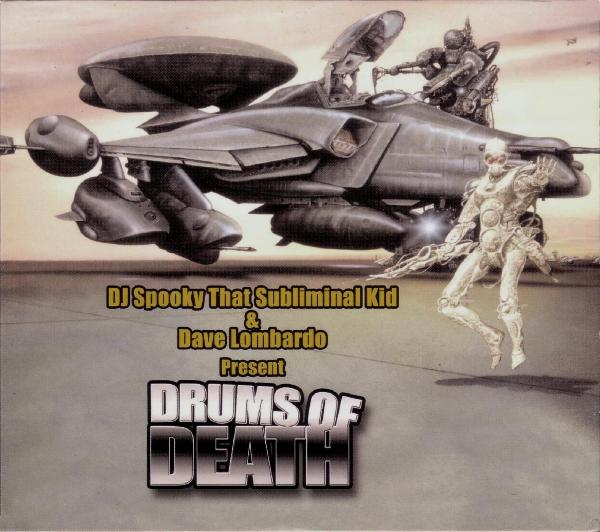 DJ Spooky (Paul Miller) and Slayer drummer Dave Lombardo are the core of this oddly compelling recording. Together with bassist Jack Dangers, this cleverly arranged fusion of samples and hard rock creates a niche unlike any other in the modern musical climate. Sci-fi artwork belies an implied futurism which doesn’t quite fit the incorporation of rap and back beats, but somehow it works based on the musicians’ personal interaction. The 16 track disc opens with Chuck D from Public Enemy giving two compelling raps re-worked with a funky vibe over a chunk of heavy rock, “Brother’s Gonna Work it Out” and “B-Side Wins Again.” Other songs of note include “Metatron,” that sets up a basic funk groove with great drumming and an adept moving low end that blurs into some industrial angst. The quartet line-up does their first set of blistering jams on “Quantum Cyborg Drum Machine,” where guitarist Vernon Reid is smokin’ hot. He mops up the track with his exciting leads panning from left to right stereo channels. Reid also appears on four other pieces including a memorable passive solo soirée on “Guitar DJ Tool Element.” Other tracks include “Incipit Zarathustra,” which pairs down the two prime instigators of the project down to the bare bones with scratching turntables scrambling over furiously skilled drum cadenzas. In summary this CD is a new, carefully constructed hybrid that blends the better of two uncompromising worlds.