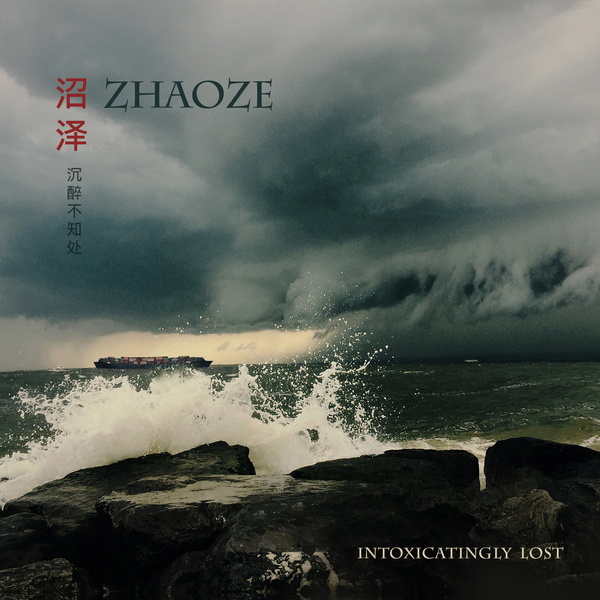 With Intoxicatingly Lost, Trail Records gives Guangzhou’s Zhaoze their most prominent international release to date. This collection contains four tracks from 2015’s Yesternight Yes Tonight, one (the title track) from a 2015 EP, two from Cang Ling Xing (2010), one from 1911 (2011), and one from a movie soundtrack that was previously released on an EP. This selection provides a good overview of the band’s sound, which is consistent enough over this time period that it even works as an album in its own right. The tracks aren’t sequenced chronologically, but provide a flow of mood and sound. In particular, the Yesternight tracks feature a somewhat expanded instrumentation, featuring the xiao (a Chinese traditional flute) prominently, so dividing them into two chunks helps the set sound more coherent. In its current form, Zhaoze is a post-rock band that features guqin prominently, whether plucked in a traditional manner or played with a bow and sounding very much like a cello. As with many post-rock bands, the sound is sweeping and expansive, with dramatic melodies and long swells over fairly simple rhythmic backgrounds. But Zhaoze are masters of subtle variation, and by tweaking the instrumentation here and there come up with a sound that is not so homogenous that it ever gets boring. There’s sometimes an acoustic guitar in the mix, or the electric is played with an ebow; the guqin and xiao are not just ornamentation but integral to the arrangements. Track 8 adds a new wrinkle, featuring vocals singing Chinese lyrics in a brief verse at the beginning, then wordlessly later in the tune. The collection finishes with the title track, a 12 minute epic journey with widely varying sections flowing smoothly. This great band’s recordings have been difficult to come by in the past — now there’s no excuse not to check them out. Highly recommended for lovers of dramatic (but not corny) instrumental music.