The first WOMAD (World Of Music Art and Dance) festival was in 1982, inspired in large part by Peter Gabriel’s love of music from around the world. Since then, there have been festivals in various locations in Europe, Africa, and Asia on a regular basis, but aside from a short tour of one-day mini-festivals in 1993, WOMAD has never gained a foothold in North America. The festival has finally found an American home in Redmond, Washington at Marymoor Park, not far from Seattle. 1998’s WOMAD USA is the first of many projected annual festivals, and if they can all be as interesting and varied as this one, I wish them a long and healthy life. One of the things that sets WOMAD apart from other festivals is the chance to interact with the artists in workshops, discussions and interviews.

One thing I can say for the festival organizers is that the logistics were well done. Parking was a breeze (and free), and there were plenty of staff around to keep things flowing. Upon arrival, I wandered around the grounds to get a feel for how things were laid out. The Mainstage dominated a large field just inside the main entrance, with food and other booths nearby. Behind a stand of trees was the Starbucks Village Stage (get used to the corporate sponsorship idea - it's the only way a festival this size can exist), where Shikisha, a trio of Zulu women, sang, danced, and played drums. We wandered through the Village and found ourselves in another clearing with more food booths and two large tents with stages set up inside. As there was nothing happening on either of them, we gravitated to the area next to a little windmill, where an African puppet show was in progress. By then it was time to take our seats for the first real show of the weekend: Zakir Hussain under the Big Top. 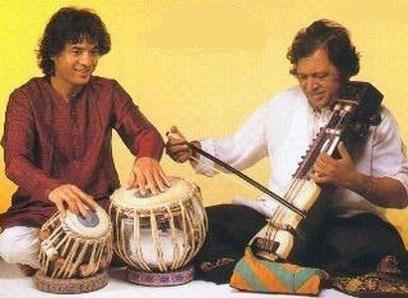 From the setup, it was apparent Zakir would be staying to the more traditional side of Indian music. His tablas sat on a low platform center stage, and only three microphones could be seen. When he came out, the sizable crowd cheered enthusiastically. Zakir introduced his musical partner for the weekend, Ustad Sultan Khan, master of the instrument called sarangi, a stubby stringed instrument played with a bow like a small cello with a number of sympathetic strings for resonance. After a short primer on the structure of traditional Indian music, they began an afternoon raga. The music was fascinating, and both men are virtuoso players, but unfortunately the set was plagued with sound problems. Between the soundman’s unfamiliarity with the instruments and the noise of the puppet show not far away, distraction was frequent, though not always destructive. At one pause in the music, Zakir cocked his head to listen to the African drumming, then started imitating it with a rockabilly-style bass part on his larger drum. Khan joined in for a time in the same style, then they returned to the raga.

When the raga finished, it was time to rush over to the Mainstage for the Opening Ceremonies. The ceremony was brief - Thomas Brooman, Artistic Director for WOMAD, presented King County Executive Ron Sims with an African drum and thanked him for the beautiful festival setting. Then Senegalese pop singer Baaba Maal took the stage for a rousing set of Afropop, a fusing of traditional rhythms, funk, and latin styles. After that set, we went back to the Big Top to see Lo'Jo, a French band which had been getting good press. Their music is a mixture of Kurt Weill European dancehall music, Caribbean rhythms, African grooves, and Middle Eastern melodies. Well-played, but to my mind it didn't hold together very well, and the lead singer, with his jerky moves and incoherent French rambling, bordered on annoying. As we left the grounds, Canadian rock band The Tragically Hip were on the Mainstage, but the'’ve always seemed rather ordinary to me, so we passed them up and called it a night.

The second day of the festival started with Hungary's Muszikás on the Mainstage. While they are primarily known as exponents of traditional music, to my ears, the exotic melodies have a very fresh sound similar to the Bulgarian female choirs which have received so much attention. For several songs, singer Márta Sebestyén, whose voice was used so beautifully on Deep Forest's second record and the soundtrack to The English Patient, joined the band. In addition to violin, viola, and upright bass, they played medieval instruments which looked like crudely made cellos but turned out to be percussion instruments. Another highlight was when Márta played a flute with no finger holes which managed to produce a full range of notes.

After that I attended a workshop where Justin Vali, master of the valiha of Madagascar, was constructing an instrument while a translator explained the process. The valiha is a beautiful harp made of a length of bamboo with strings mounted around it. A little later a local African music expert interviewed King Sunny Ade, who provided many interesting insights into life and culture in Africa. Yet another workshop featured Zakir Hussain, Michael Shrieve, and Roy "Futureman" Wooten, drummer for Béla Fleck’s Flecktones. Futureman provided a demonstration of the "Synth-Axe Drumitar" he has created. It started life as a Synth-Axe guitar synthesizer, and has since been modified with piezo-electric sensors all over it, each of which can trigger a different sample in a rack-mounted unit. In addition to percussion instruments, he uses samples of voices, noises, and anything else he likes, making for a multitude of fascinating possibilities.

Next on the Mainstage was Béla Fleck and the Flecktones. As always, their jazzy melange of bluegrass, rock, funk, and improvisation was thoroughly intriguing. There is no doubt that Victor Wooten deserves his multiple titles as Bass Player of the Year, and Fleck himself is amazing with what might be considered a limited instrument. Of course, when you hook a banjo up to a guitar synthesizer, it can do anything a guitar would. And then there's Futureman, whom I’'e already discussed. The core trio was joined by reedman Jeff Coffin on saxes and flute, and he managed to keep up with the pyrotechnics admirably. This is truly one of the most innovative bands of the decade, no matter what genre you put them in.

Saturday finished off with a set of Nigerian juju music from King Sunny Ade, then selections from the recent Woody Guthrie project with Billy Bragg and Wilco.

Hometown heroes Tuatara opened the final day of the festival with a much-improved sound from when I've seen them before. They've expanded the lineup to include two saxes and a trumpet, and are really emphasizing the horns. This jazzy touch fills out the sound provided by the exotic percussion and world-music-inspired grooves, which tend to get a little tiresome without them. The fiery set also featured some nice slide guitar from Peter Buck of REM. After Tuatara finished on the Mainstage, we caught most of Justin Vali's set at Starbucks Village, then hung around there to watch Zakir Hussain a second time. This set was also marred by technical problems. Later, we saw Kepa Junkera in the Big Top, for one of the great discoveries of the weekend. Kepa plays an unusual type of accordion called a tritikixa, which is traditional in Basque culture, but he has taken the instrument into the modern era with percussive arrangements and original tunes. Many of the pieces changed time signature so many times I (a compulsive beat-counter) was completely lost. Amazing! Another Seattle-area band, Sky Cries Mary, took the stage in the Big Top to an overflowing crowd. Their mix of techno beats, washes of sound, and trance-like vocals seemed a little diffuse on a sunny afternoon, but they thrilled nonetheless.

The festival ended with a rare American performance by Ravi Shankar. Joined by his young daughter Anoushka, a formidable sitar player in her own right, and an ensemble including two percussionists, Shankar thrilled a crowd of thousands with one raga and a number of short pieces. Then we had to endure a long break while the crew set up the Grande Jam. This massive event featured dozens of artists from groups which played the festival. Backed mostly by Tuatara and Lo'Jo, many soloists, singers, and groups (including pop star Joan Osborne) jammed on a wide variety of music, finishing with a spirited (if not too polished) version of Stevie Wonder’s "Superstition."

Gavin Lurssen - Restless – Restless is Gavin Lurssen's first major effort as a solo acoustic guitarist. Originally from South Africa, he came to the Americas when he was sixteen. He attended Berklee College of Music where...  (2000) » Read more

Kepa Junkera - Bilbao 00:00 h – The first I ever heard of Kepa Junkera was at the first WOMAD USA festival. He was an unknown quantity that my wife and I checked out and became enraptured with. He plays the traditional Basque...  (2000) » Read more