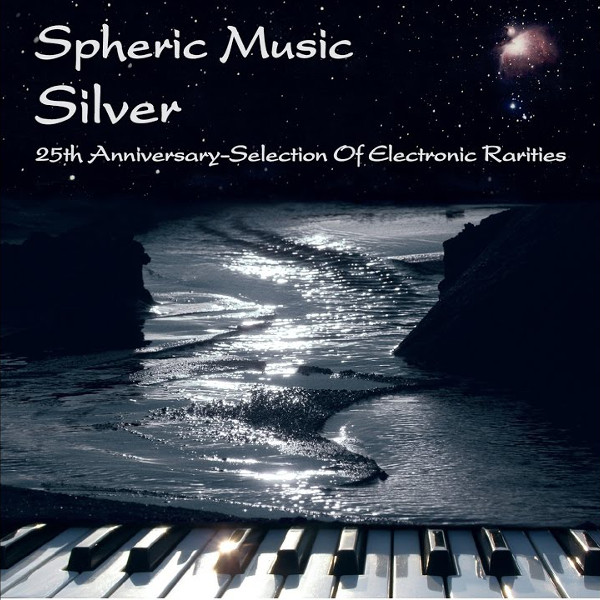 25 years ago German synthesist Lambert Ringlage formed the Spheric Music label to publish his first solo CD. Since 1991, the label has grown to include the discography of 20 different electronic artists, many of whom have tracks on this new sampler CD, Silver. Rather than provide a sampling of the music released by Spheric over the past 25 years, Lambert chose to include instead unreleased tracks by these artists plus a rare track by Joel Fajerman, a soon to be released Spheric artist, and a Klaus Schulze track from his Contemporary Works 1. In addition to Klaus Schulze, the other well known artists that appear are Robert Schroeder and Bertrand Loreau. The other artists, Klangwelt, Axess, Vanderson, Rudolf Heimann, Mesmerised (aka Palantir), and Lambert himself were unknown to me even though I've reviewed Klangwelt's XOIO. The one track that seems out of place with the rest is Joel Fajerman’s opening track “Late Evening.” This is a New Agey Euro-Pop tune that is a bit romantic. Robert Schroeder’s “AtmoSPHERIC” is an excellent composition of pulsating cyclic chords and rhythm that slowly evolves. Klangwelt’s simplistic chord changes on “Starlight” are engaging, especially when the vocoded vocals appear. “Edison’s Legacy” by Axess is another example of cyclic electronic music that moves into Tangerine Dream territory. Vanderson’s somnolent and restful “Ambient Garden” is next, followed by Rudolf Heimann’s “In Hellem Blau,” a catchy sequencer-driven electronic piece. Mesmerised’s “Room Caught in a State of Longing” is another repetitive sequencer composition. Bertrand Loreau’s “Art of Sound Part 3” is a crystalline ambient piece with analog sequencers. And what can I say about Klaus Schulze that has not already been documented? “The Breeze” is a different kind of composition for Klaus, focussed around flutes and an ostinato sequenced rhythm. The disk closes with Lambert’s appropriately named “Silver,” another synth-pop rock tune. As with most compilations, you will find some things you like, some things you hate, and others that don’t grab your attention.