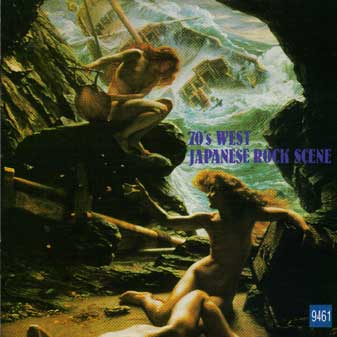 Apart from the Tokyo scene in the 70s, there were many progressive bands operating in the Kansai region, outside of Tokyo and in the west of Japan, in places like Osaka, Kyoto, and elsewhere. 70's West Japanese Rock Scene is a compilation that documents some of the music of that scene by bands who never got their break. This compilation pre-dates the Tokyo compilation by a few years – these recordings span the years 1976 through 1979, and to be fair, many of the musicians here did eventually meet with some level of success, but many of the names and faces had changed by that time. Six different bands are represented here, for a total of seven cuts.

Schéhérezade kicks the program off with "Namidanonakae" and closes it as well with the eleven minute "Boyhood - The Cliff." This band features some famous names – Teru Hirayama, who would go on to Novela, and eventually Teru's Symphonia, plays guitars, and keyboardist Toshio Egawa, who would later play in both Novela and Gerard. In fact most of the Schéhérezade lineup went on to form Novela (one might suspect some influence from the band Renaissance, with band names like Scheherezade and Novela, but that connection is not so easily made). Tenchisozo, an early formation of Ain Soph, is here with "Dr.Macoy," a track which will remind some of early Soft Machine. Maria was a band that was active from '72 until around '78. Their offering, "Serenade" from 1976, represents the oldest recording on this disc, but with its Spanish flavor and heavy use of symphonics, it's also one of the best.

Rumble was a band led by guitarist Ikkou Nakajima, who later with Hiroko Nagai would be one of the main movers in Pageant. Also featured in the lineup is keyboardist Toshio Egawa (Gerard). Their contribution, "Kagerouno Maki," is a powerful rocker with driving vocals and tight guitar-keyboard interplay. Charisma offers "Red and Black," an ambitious rock-fusion piece with spirited guitar work from Mitsuhiko Izumi (later of Dada and Kennedy) and drumming by Kouzou Suganuma (later of Black Page). Lastly, there is Round House with "Jinzo-Ningen" from '78 (and the title cut from their posthumous CD released in 1991). Overall, a lot of good music here. Sound quality is slightly substandard, but still very listenable... the price we pay for a piece of history.