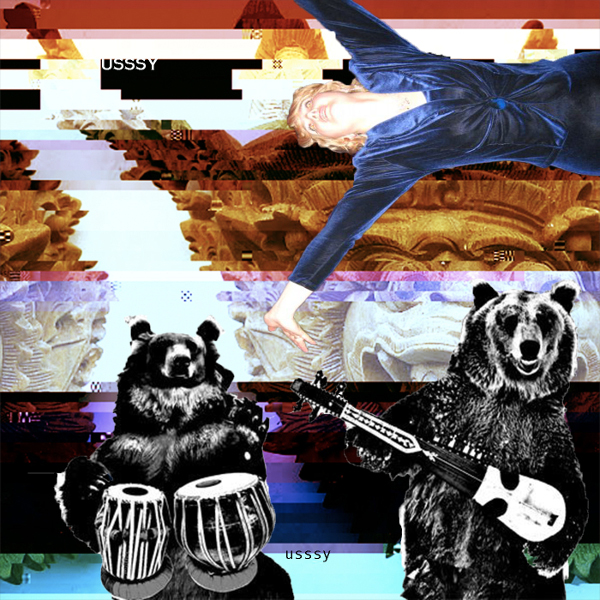 As the music industry has changed over the last few years, some of the functions previously performed by record labels, such as paying advances for studio time, serving singles to radio, and providing superstars with cocaine, have become more or less obsolete for all but the biggest of pop acts on the handful of remaining major labels. What remains for labels outside that little club to do is partly a matter of curation, a form of quality control, being trusted (or not) filters for artists who fit the label’s style or level of professionalism. With millions of recording artists all over the world, we all need someone to point us in the right direction now and then. So when a new artist comes out on Moonjune or Cuneiform or another label we trust, we can be reasonably certain that certain criteria will be met. Tenzenmen has a very eclectic roster from a stylistic standpoint, but there is an esthetic at work, so when they present something, it’s worth checking out. Usssy is (or was) a Russian duo active from 2009 to 2013, and with this collection, Tenzenmen presents two tracks each from six releases, plus one live track from another. On the earliest material, from 2009, they thrash out a noisy take on post punk, with snarling vocals, dissonant guitars, and barely reigned-in chaos. “Cock-Fight,” from 2010’s Oko, starts out with wailing slide guitar and free-form pounding drums, then moves through a set of crazy riffs and rhythmic patterns that are heavily distorted but tightly choreographed. By 2011, with Ud, we start to hear some Middle Eastern influences, where the thrashing noise is topped by catchy melodies that sound vaguely Turkish. The 2012 live track shows this trend taken further, with an acoustic stringed instrument (I‘m not going to try to identify it beyond saying it has metal strings) backed by hand percussion. For Karpet Birch (2012), the microtonal nature of the melodies comes more to the fore, and instrumentation is expanded to include keyboards and synthesizers, resembling a twisted modern version of early-70s Turkish psychedelia — Moğollar remixed by Merzbow, maybe. Punk rockers who grew up listening to The Devil’s Anvil reinterpret the music of their youth in epic fashion. The later releases are well worth investigating, and this compilation performed its function admirably: Turning me on to an artist I’d never heard of, and pointing me to the parts of their catalog I’ll like best. Many thanks, Tenzenmen!