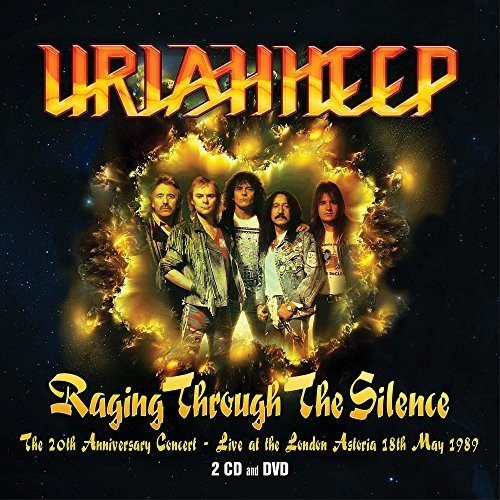 By 1989, 20 years on from their founding, Uriah Heep had been through a lot of ups and downs, with only guitarist Mick Box remaining from the original lineup (although drummer Lee Kerslake had been on board since the hugely successful Demons and Wizards in 1972). Original singer David Byron and keyboardist Ken Hensley were ancient history by then, now replaced by relative newcomers: singer Bernie Shaw, keyboardist Phil Lanzon, and bassist Trevor Bolder, the latter on board since 1977’s Firefly, replacing John Wetton. Raging through the Silence was recorded on the Raging Silence tour, originally released only as a VHS tape, but here re-released for the first time on DVD along with a disc and a half of the same music on CD (the first time the audio track has been released on its own), with a lengthy band interview appended to the end of the second disc. Apparently the band is re-releasing everything on their own label, making everything available once again, and this VHS had been unavailable for a long time. The set kicks off with “Bad Bad Man” from the then-latest album, and other songs from Raging Silence (“More Fool You,” “Cry Freedom,” and “Blood Red Roses”) are interspersed with classic material like “Gypsy,” “The Wizard,” “Easy Livin’,” “Stealin’,” and many more. Most impressive is the closer, a ten-plus minute version of “Look at Yourself” that might well be the best tune of the set. The audio material on the two CDs and the DVD are exactly the same material, and of course the DVD will give you the full power of sights and the sounds. I probably wouldn’t recommend this as a starting point for a Uriah Heep newbie, but for the longtime fan this set will definitely be of interest.